I attended a reading by Augusten Burroughs a few weeks ago as part of Hunter College’s Distinguished Writers Series.

Burroughs is best known for his 2002 memoir Running with Scissors, which I read a few years back (there’s a movie too). He recently put out a self-help book titled This Is How: Proven Aid in Overcoming Shyness, Molestation, Fatness, Spinsterhood, Grief, Disease, Lushery, Decrepitude & More. For Young and Old Alike. Yup.

From the little bit of background I knew about the author and what I read in Running with Scissors, I was expecting Burroughs to be a grade A kook from outer space. Which he was, a little. He was also well-spoken, engaging, and scattered.

Running with Scissors details his bizarre adolescent years after his parents divorce and he is sent to live with his mother’s psychiatrist. And these people ARE grade A kooky. As the professor who introduced Burroughs said, “You can’t make this shit up.” And Burroughs has made a very good career of telling it like it is.

It is apparent from the memoir, as well as the talk, that Burroughs had a truly disturbing and tumultuous adolescence. If there is anyone who could give advice on how to survive life’s hardships, it would probably be him. He talked about tough topics and gave some interesting perspectives. When he attempted suicide, he realized, at that moment, that he didn’t actually want to die. Rather, he wanted to change his life. And that he did, by changing his name, graduating school, and moving across the country.

Burroughs read three pieces, including a very rough first draft of a new story. As any writer knows, it is painfully awful to read a first draft aloud to an audience, so props to him. He fielded a bunch of questions about his writing style and process. Since most of his work deals with his tumultuous past, he was also asked if writing is a kind of therapy for him. Surprisingly, he said no, and that if it wasn’t writing, he would just be doing something else. The actual act of writing focused him (I find that to be very true as well) but he doesn’t use it as an outlet to explore the things that have happened to him. 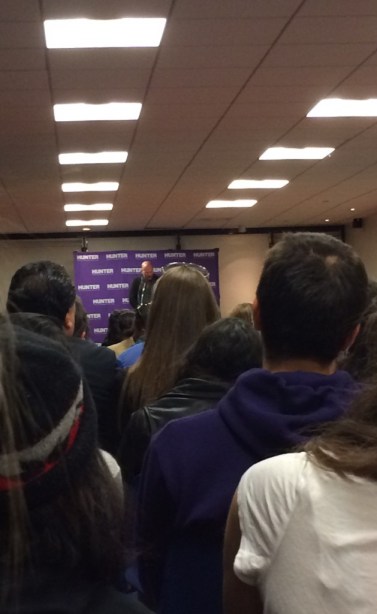 Sorry for the bad picture – we were sitting so far back!

I’ve really been thoroughly enjoying this writers series and hope to find more like it around the city. Up next – Joyce Carol Oates!