Is feminism a new hot topic? I’ve been seeing it pop up everywhere – in the media, at the UN, in my neighborhood. I love that people are talking about it. Hopefully, with more discussion and education, the general perception will move away from feminism being a dirty word loaded with negative connotations and seen instead as a positive movement to help both genders move towards equality.

Roxanne Gay is the Shit

I recently picked up this bad boy in my local bookstore. 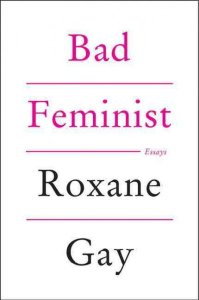 Roxanne Gay dives into everything from dating websites, to bad reality television, to women being successful, to the state of feminism today. I’ve read Gay described as a ‘cultural observer’ and this title fits her well. She straddles the line between pop culture connoisseur and intellectual critic. It reminds me of another favorite, How to Be A Woman by Caitlin Moran.

When I heard that Roxanne Gay was going to be speaking at the Brooklyn Book Festival this weekend, I was excited. The book festival was great fun, filled with booths, talks, authors, publishers, and lots and lots of books. Roxanne Gay, Kiese Laymon, and Leslie Jamison (The Empathy Exams) gave a talk titled ‘This Woman’s Work’ that discussed the contradictory ways in which girls and women are perceived today, how feminism is a divided community, and how to provide a more inclusive and tolerant way forward.

Sounds cool, yes? If would have been, if I could get in. I arrived about 10 minutes before the talk to find hundreds of people wrapped around two blocks and no more room in the auditorium. Two blocks! For a feminism talk! While I was bummed I didn’t get to see the talk (I saw Eric Schlosser (Fast Food Nation, Command and Control) instead), I was SO HAPPY to see people interested in hearing a talk titled ‘This Woman’s Work.’ Woo!

In case you’ve been living under a rock, Emma Watson gave a speech about feminism at the UN this week and it was awesome. She spoke about the new HeForShe Campaign, which aims to get more boys and men involved in the fight to end gender inequality. I think it’s a brilliant move to make feminism more appealing, broad, and inclusive. Ms. Watson duly noted that feminism has become a dirty word and why that is problematic:

I decided that I was a feminist. This seemed uncomplicated to me. But my recent research has shown me that feminism has become an unpopular word. Women are choosing not to identify as feminists. Apparently, [women’s expression is] seen as too strong, too aggressive, isolating, and anti-men, unattractive even.

I was most impressed with how Ms. Watson emphasized that gender equality benefits everyone, and that as a society, men have been detrimentally affected by rigid gender roles as well:

Men, I would like to give this opportunity to extend your formal invitation…Because to date, I’ve seen my father’s role as a parent being valued less by society. I’ve seen young men suffering from mental illness, unable to ask for help for fear it would make them less of a man. In fact, in the UK, suicide is the biggest killer of men between 20 to 49, eclipsing road accidents, cancer and heart disease. I’ve seen men fragile and insecure by what constitutes male success. Men don’t have the benefits of equality, either.

When you hear that John Oliver is going to cover the Miss America Pageant, you think you know where this is going to go. And at first it does, mocking the archaic and sexist traditions of the pageant (women’s head circumference used to be measured, for God’s sake). But then he leans into a deeper issue: Miss America claims to be the world’s largest provider of scholarships for women. $45 million dollars worth of scholarships, in fact.

$45 million dollars is a HUGE number, and John Oliver and his team think so as well. So they do some great investigative journalism and find that the organization only actually awards a fraction of that to women each year. Here’s what they do: Miss America offers winners scholarships to multiple colleges, even though each recipient can only conceivably enroll in one college at a time, then counts each scholarship offer in its total sum to get to $45 million, whether they’ve actually paid out or not.

So, it’s a sham. But Mr. Oliver’s team also found that the money Miss America actually gives out (much less than $45 million dollars) still makes it the world’s largest provider of scholarships for women. Is that the best we can do?

He directs the audience to websites for the Society of Women Engineers, the Patsy Mink Foundation, and the Jeannette Rankin Women’s Scholarship Fund, all of which have scholarships just for women. In the days since the segment aired, all of these organizations have seen a large uptick in donations (yay).

then donate to these worthwhile organizations.

So give John Oliver’s take-down a watch. He addresses the issue with more humor, thought, and gravity than I could hope to do here.

To summarize, everyone from Roxanne Gay to Emma Watson to John Oliver has feminism on their radar. And I love it.