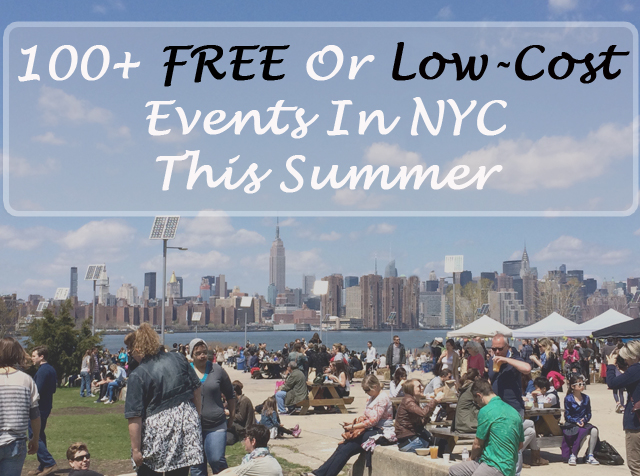 Memorial Day weekend marks the unofficial start of summer and is a great time to start your warm season to-do list. While most New Yorkers catch the first Friday afternoon train out of the city, New York is actually a fantastic place to visit in the summer with lots of free or low-cost events (if you can get past the smelly street garbage and hot subway stations). Whether you live here or are planning a visit to the city, there are TONS of great events lined up for this summer.

Here is a huge meta-list, covering all the summer months, across most of the boroughs (sorry, Staten Island), with as many interests as I could find. Hope you enjoy this summer events list, and feel free to add more in the comments! 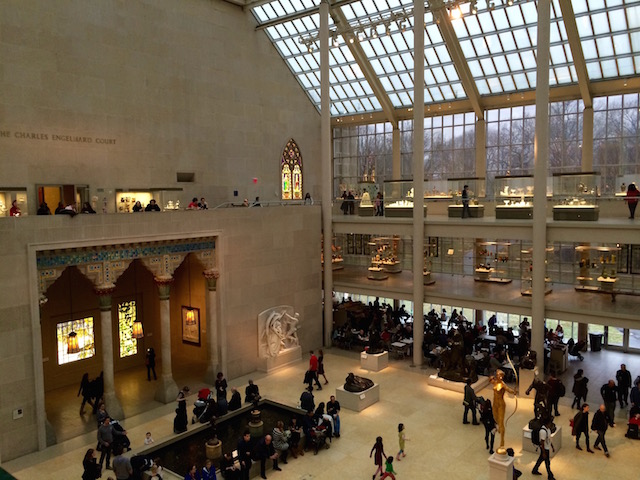 Fifth Avenue is closed to all vehicles between 79th and 110th streets and all of the museums along this stretch (known as Museum Mile) offer free admission to the public. Participating museums include the Metropolitan Museum of Art, the Guggenheim, the Jewish Museum, and the Museum of the City of New York, among others. There will also be parties, dancing, and entertainment in both the street and in the museums. About 50,000 people are expected to attend (!) so get there early if there’s something you’d like to see.

Guggenheim’s Art After Dark is a seasonal event where folks can enjoy the museum, including the landmark building, the art, and other special exhibits, after hours when it’s not as crowded. There’s a cash bar and an artist-curated playlist. There are no tickets at the door so purchase in advance.

Many New York museums, including the Museum of Modern Art (must have a ticket in advance), the Rubin Museum of Art, the Morgan Library and Museum, Museum of the Moving Image, among others, offer free admission on Friday evenings.

Exhibits in New York This Summer

Matthew Weiner’s Mad Men at the Museum of the Moving Image
Through June 14, 2015
$12 museum admission

Get there soon! I went a few weeks ago and it was fantastic. Featuring sets, costumes, art, and Weiner’s own research and notes, the exhibit offers a unique view into the creation and production of one of the most iconic shows in recent years. A must-see for all Mad Men fans, especially if you’re like me and swooned over the recent series finale.

Featuring more than a dozen drawings and paintings, a reimagining of her studio, desk, and garden, and talks on her work and influence, this is a great exhibit on one of the masters of self-portraits. 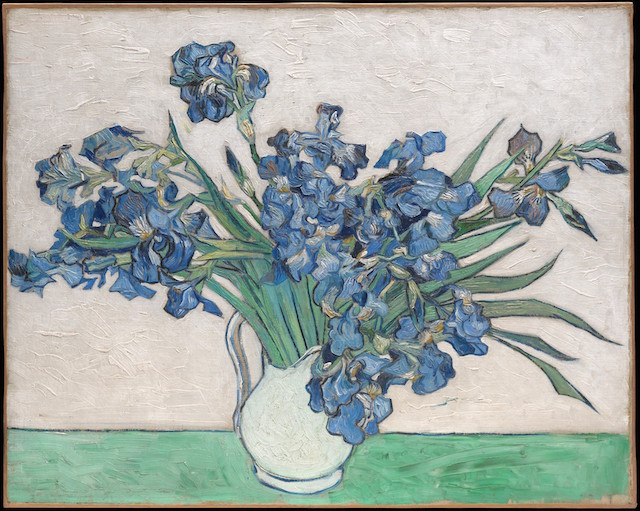 Van Gogh: Irises and Roses at the Metropolitan Museum of Art
Through August 16, 2015
$25 museum admission

Three iconic paintings by Van Gogh created right before his departure from the asylum at Saint-Rémy are being featured at the MET.

Hands-down, one of my favorite things to do in the summer (I go the Brooklyn concert every year), the New York Philharmonic plays a FREE concert in each borough (except Staten Island, because everyone forgets about State Island), with fireworks after each concert. A great activity to do by yourself, with a significant other, a group of friends, or the entire family! Bring a blanket, picnic, and/or lawn chairs. Just don’t be a douche with the high patio furniture that blocks everyone’s view.

This year’s program features an all-American show with Joshua Bell, Petrushka in Central Park and Brooklyn, and West Side Story in Queens and the Bronx.

The MET does a similar concert series as the New York Philharmonic with FREE concerts in NYC parks. What’s better than hearing world-class opera on a beautiful summer evening in one of the greatest cities for FREE? Not much.

Different performers and accompanists are featured in each show.

Another series that is near and dear to my heart, Celebrate Brooklyn! is a series of both free and low-cost concerts, mostly at the Prospect Park bandshell. Starting with a FREE kick-off concert with Chaka Khan, the series is a great way to hear both famous and up-and-coming musical acts. The full line-up is here. Benefit concerts include Damien Rice, Interpol, Modest Mouse, Edward Sharpe and the Magnetic Zeros, and Willie Nelson & Family and Old Crow Medicine Show. Ticket costs for the benefit concerts go to supporting the rest of the series. 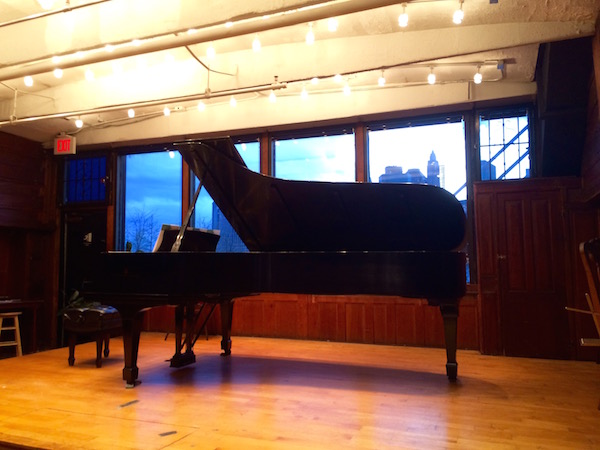 The piano blocks the beautiful view out of the barge, but the venue is fantastic.

One of those “only in NY” things, Bargemusic showcases classical music on a barge floating on the Hudson. Located off Brooklyn Bridge Park with Manhattan as a backdrop, the concerts feature both classic and contemporary pieces. I went to see a piano recital and it was fantastic. Note that the barge moves along with the river, so those prone to seasickness may want to pass!

If that’s not enough free concerts for you, here is an exhaustive list from NYC Parks of FREE summer concerts.

Wednesdays include line-up of this year’s critically-acclaimed movies including The Imitation Game, Interstellar, Boyhood, Selma, and Neighbors. Fridays show family-friendly movies such as SpongeBob, Annie, and Jumanji. All shown under the stars and FREE. 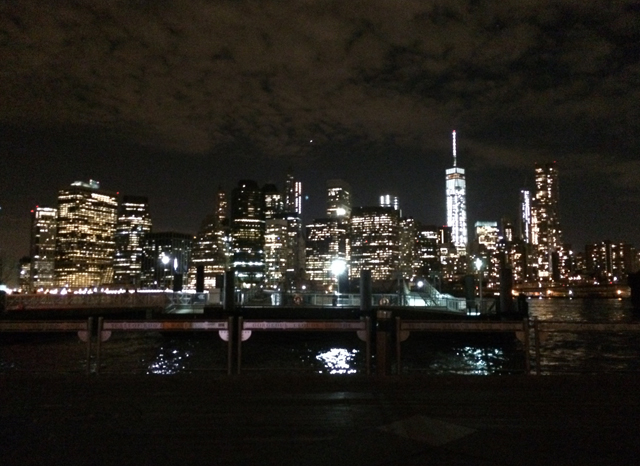 Brooklyn Bridge Park has one of the most stunning views in NYC, IMO, with downtown Manhattan as a backdrop. It’s even more stunning at night, with the entire city lit up. This summer’s movies include Die Hard, Dazed and Confused, High Noon, Clue, and Dr. Strangelove.

The 12th annual Song of Myself Marathon is hosted by an NYU professor, and features readings, dramatic performances, and interpretations of the famous poem. You can sign up to read as well!

NYC storytellers, authors, and comedians gather each month to perform and eat ice cream cakes. A fun, quirky thing to do. Takes place at The Gallery at Le Poisson Rouge on Bleeker Street.

One of the best reading series in the city, each reading features at least one poet from Brooklyn.

Storytelling (maybe saying “performing stories” is more accurate) has become a popular art form in recent years, and no one has embraced this as much as The Moth StorySLAM. The story slam takes place in cities throughout the US but it’s especially fun to attend in NY. Get tickets in advance if possible, as many of the NY shows sell out.

In addition to these events, book stores all over the city offer reading series, author Q&A, and author signings.

Various yoga studios offer FREE outdoor yoga in Prospect Park on Thursday evenings. Bring a mat and get ready to stretch and relax. 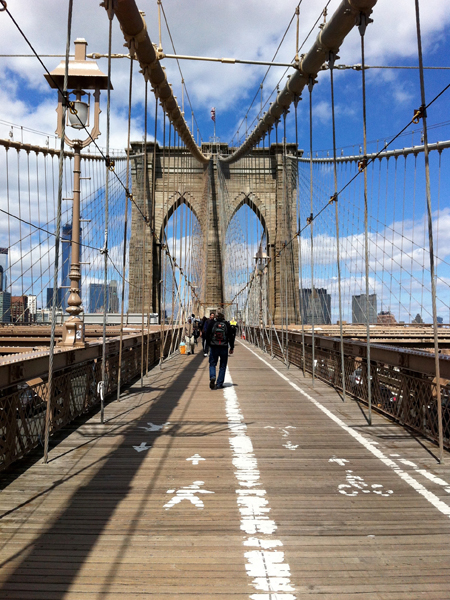 Brooklyn Bridge Park offers a ton of free exercise classes throughout the summer, usually in the early morning or evening. Pilates, ballet barre, yoga, dance, kayaking, total body conditioning, hip hop, walks across the bridge, and more – you’re almost guaranteed a free workout most days. Who needs a gym membership this summer? Not me! 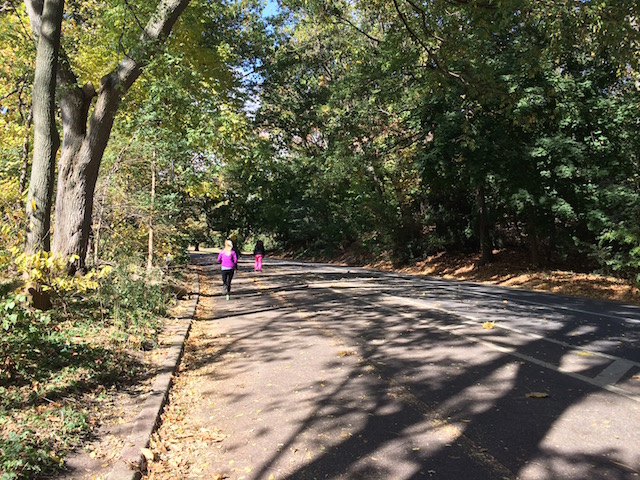 Practically a New York institution, Shakespeare In the Park has two FREE plays this summer in Central Park: The Tempest and Cymbeline. This enormously popular program has started a day-of online lottery system, which will hopefully beat waiting in line for hours for tickets.

Three plays are featured this year: The Two Gentleman of Verona, Romeo and Juliet, and The Taming of the Shrew, all on weekend evenings, all under the stars, and all FREE.

For Shakespeare lovers: plenty of theatre groups put on performances in parks around the city throughout the summer. Check separate scheduling information for shows. I just recently stumbled upon ‘As You Like It’ in Washington Square Park. You never know!

A celebration of modern dance features some of New York’s most famous dance companies. And it’s free!

Some of the best modern dance companies in the city perform for free in Bryant Park on these Friday evenings.

This is so fun! Lincoln Center opens a large outdoor dance floor and a different band performs each night. The dance floor opens at 6:00, there’s a group dance lesson from 6:30-7:15, and the rest of the night is spent dancing away.

It’s so hard to pin down the best NYC food and bar events in the summer – there’s a bazillion street festivals, tons of live bar music, and plenty to eat, everywhere, always. Here are a few of my favorite NYC bar and food events. 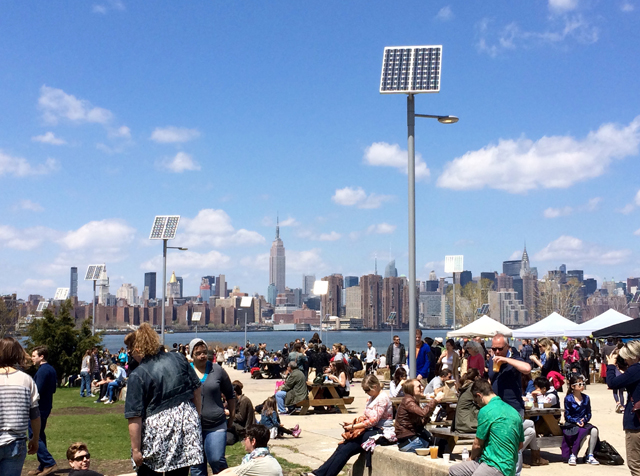 Smorgasburg
April-November, 2015
FREE to get in, food for purchase

Taking place on Saturdays in Williamsburg and Sundays in Brooklyn Bridge Park, Smorgasburg is every food lover’s paradise with tons of local restaurants, food trucks, and independent specialty stands serving their best. Every food imaginable is here: from beet burgers, to lobster, to ice pops, to vegan ice cream, to filipino sandwiches – both simple and exotic food is aplenty. It’s a hugely popular event, however, so be prepared for crowds and long waits at some of the stands.

Three courses, fixed menu, and a great way to try that fancy restaurant you’ve been eyeing without paying an exorbitant price.

A themed bubble fight in Union Square. Might be a little soapy.

Just what it sounds like. Bring your 90’s super soaker!

An “Amazing Race” style event where participants solve clues, answer trivia, and race around the city.

New York is a great place to visit in the summer, if not only for the sunny weather, but because of all of the FREE, spectacular, fun events. I’m sure I missed a whole bunch of stuff, so if you know of a free or low-cost event that hasn’t been mentioned, leave a comment. Happy summer!