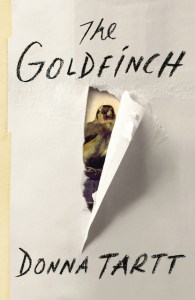 Probably the most buzzed-about novel of the year, The Goldfinch has graced many a store bookshelf, been put on hold at many a library, and slugged through by many a reader, culminating in a little award called the Pulitzer Prize for Fiction. It’s also controversial – some readers loved it, others hated it, some loved parts of it but disliked the rest. A few critics deplored the writing, citing a confused plot, repetitive metaphors, and lazy narration, while others praised the strong, bold characters and urgently-paced story. Either way, it is a mammoth work, coming in at just under 800 pages. It also has all the hallmarks of an epic, taking the author 11 years to complete, with the story covering all marks of space, time, history, and location.

And me? Loved it! Yes, it has flaws, but I think that the rest of the work was strong enough to help the reader look past them.

The beginning of the book shows our narrator, 13-year-old Theo Decker, guiltily slumping around New York City with his mother, awaiting a dreaded disciplinary conference at his school. To kill time, they decide to visit the Metropolitan Museum of Art to check out an exhibit on Dutch masterpieces, which includes The Goldfinch, a 1654 oil painting by Carel Fabritius that has always fascinated his mother. While in the museum, a bomb goes off, decimating the area around Theo. He survives but in his confusion and chaos, takes a family heirloom ring given to him by a dying elderly man, as well as the painting. He later learns that his mother has perished in the attack. It is important to understand that his beloved mother was his only person – his father was a lazy, thieving alcoholic who left them the previous year, and he has no other close family. 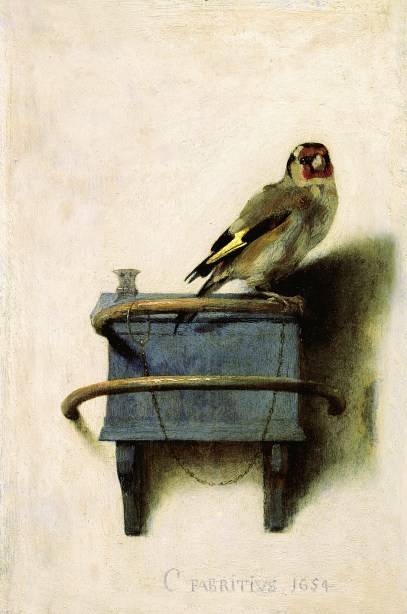 It’s a real painting! You can see it at The Frick Collection in NYC.

Theo hides the painting in various locations and goes to live with his friend’s family, the Barbours, on Park Avenue. A bit tragic, a bit comical, and completely out of touch, the Barbours inhabit a world of wealth and privilege that is completely foreign to Theo. While trying to conform to their upscale life and be as little of a nuisance as possible, he is desperately grieving his mother and the comfortable, intimate existence he has known.

Theo’s tale takes off from here and leads the reader to Las Vegas, back to New York City, and to Amsterdam. We also experience a dark side of Theo’s tale: gangsters, shooting, the black market for art, lots of drugs, and fraud (not all of it particularly realistic). It is hard to talk about The Goldfinch without introducing any spoilers. However, this large novel moves at a quick and thrilling pace and (mostly) doesn’t leave you feeling stuck.

The novel, as large as it is, feels broken up into sections. Some of these, Theo’s experience in Las Vegas in particular, are vividly and expertly written. The plot tends to get confused later in the novel. The painting drops out of existence for a hundred pages or so before Tartt ties it back in, sometimes haphazardly.

However, the highlight of the book are the striking characters. Theo, a compassionate and thoughtful boy, has his life turned upside down by a single event. This event, and the subsequent theft of the famous painting, profoundly impact Theo’s every thought and action from that time forward. He is a troubled young man with good intentions but a propensity for trouble and bad choices. Tartt has written a bold character that is both strong-willed and the ultimate survivor, but also deceptive and  disturbingly obsessive.

Some writers say that there are no minor characters, and I think The Goldfinch illustrates this point well. The cast of characters Tartt has chosen to surround Theo are as vibrant and well-drawn as he. Boris, his best friend in Vegas and fellow troubled/neglected youth, is charming yet volatile, and feels deeply for Theo. Hobbie, a kindly and trusting older man, takes Theo in and eventually becomes his business partner. Piper serves as Theo’s long-time love interest and obsession, which is not so much shaped around Piper herself but the role she has played in his tragedy.

The painting fills the heart of the story as it travels with Theo through each part of his story (the painting itself has its own tragic history). He is both obsessed with and revolted by it, it plagues him and it comforts him. He wants it gone then is devastated when it is pulled away from him. It serves as a last tie to his mother as well as a heavy burden. It is a physical reminder of the things that chain us and the things that set us free.

A terrific Vanity Fair article about why literary snobs are coming out of the woodworks to hate on The Goldfinch (although not all of their criticism is unfounded): http://www.vanityfair.com/culture/2014/07/goldfinch-donna-tartt-literary-criticism

A movie is in the works! (Maybe.): http://insidemovies.ew.com/2014/07/28/warner-bros-ratpac-the-goldfinch-adaptation/