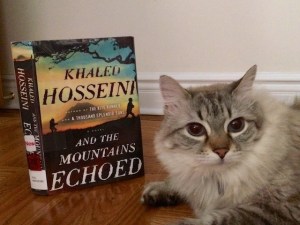 In case you can’t tell by the picture, I’m making good use of the Brooklyn Public Library lately!

It looks like I’m steadily scrolling down my To Read list, which encompassed some of the most critically praised books of 2013. Khaled Hosseini is the author of The Kite Runner, which was much beloved by everyone, and A Thousand Splendid Suns, which was much beloved by ME. A Thousand Splendid Suns was more quietly praised but I think it is Hosseini’s best book, and I’m included this latest novel in that assessment.

And the Mountains Echoed is Hosseini’s most recent novel and shares similar location, themes, and “feel” with his previous novels. Hosseini proved once again that he is a masterful storyteller. He could probably make my grocery list sound compelling.

However, I didn’t like this novel as much as his other books, and here’s why: each chapter focuses on a different character, and each character is connected to each other as part of the overall story. And the Mountains Echoed is a bit like a book of short stories with an overarching plot. It’s a cool concept, but Hosseini’s strong suit is his character development. I became deeply invested in each character only to have their story end abruptly and have to start all over with a new character and storyline. Because the novel takes place over the course of 50+ years and 3 countries, the individual stories aren’t resolved until later in the book. I think this is the reason many people don’t like reading short stories. It’s a bit of an effort to start each chapter and make myself care about a new set of characters, a new location, and a new storyline when I really just want to continue that of the previous chapter.

That being said, the stories are well-written and completely engaging. The most touching story is that of Abdullah and his beloved little sister Pari who are cruelly separated. It’s a heartbreaking study of poverty and the harshness of life in rural Afghanistan. The reader also sees the story of Nabi, Abdullah’s uncle, who lives an unorthodox but fulfilling life as the servant of a rich man in Kabul. The book jumps to two brothers who grew up down the street from Nabi in Kabul. They move to the US as teenagers and live a comfortable life until they return to Afghanistan after Taliban rule and are forced to confront the suffering and demolishment of their home country. How they deal with these experiences after returning to their pampered life in the US is both truthful and painful. We even learn about Markos Varvaris, the Greek aide worker who lives in Nabi’s house years later.

Hosseini has weaved a complex and interesting web of stories, characters, and themes, some of which are more compelling than others. There is certainly a central story (Abdullah and Pari) and stories that feel more peripheral (Markos Varvaris). The characters aren’t announced at the beginning of each chapter, rather,  you have to read a bit to connect the dots and find out who is being featured. It’s fun because the character has almost always been introduced earlier in the novel.

One thing I noticed about The Kite Runner and A Thousand Splendid Suns is that Hosseini loves to have his stories come full circle. And the Mountains Echoed is no exception. The last bit of the novel gives the reader a tragic but concrete resolution to these stories.

They say, find a purpose in your life and live it. But, sometimes, it is only after you have lived that you recognize your life had a purpose, and likely one you never had in mind.