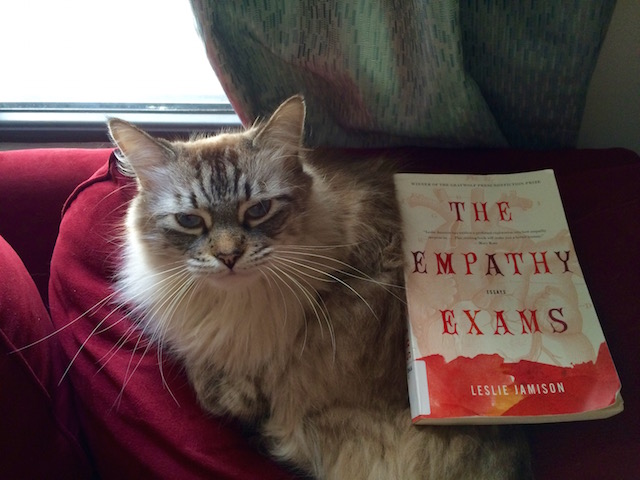 He looks thrilled about this.

In The Empathy Exams there’s not much that Leslie Jamison doesn’t cover on the spectrum of human suffering: disease, grief, violence, illness, wounds, pain, loss, regret. The book is not an exposition on gloom and doom, however. Jamison, in a compassionate, open-hearted, and honest fashion, examines at how we care about one another, how we connect to each other, and how we internalize and process the difficult situations of others.

The Empathy Exams appeared on almost every best books of 2014 lists, and has been receiving a lot of praise around the literary world. Empathy is an impressive, if elusive, concept to write a book about without descending into overly emotional stories and trite descriptions of feelings. Jamison keeps the book informative but warm, realistic but not depressing, visual without wallowing in the misfortunes of others. She also leaves room for the spectrum of human feeling, never criticizing or noting that a certain emotion is wrong (she has a whole chapter entitled “In Defense of Saccharin(e)”). She notes that many arguments can be boiled down to:

You say too much about your feelings. You don’t say enough. When you speak, it’s in the wrong language.

Jamison’s essays cover a variety of topics, people, and places, and mix her own personal experiences with thorough research. The book opens with her former job as a medical actor, where she had to enact various conditions for medical students. She covers the voyeurism of reality TV – the show Intervention in particular (of which I happen to be a guilty-pleasure fan). She writes:

…Eighteenth-century philosopher Edmund Burke proposes the notion of “negative pain”: the idea that a feeling of fear – paired with a sense of safety, and the ability to look away – can produce a sense of delight. One woman can sit on her couch with a glass of Chardonnay and watch another woman drink her away her life. The TV is a portal that brings the horror close, and a screen that keeps it at bay.

She takes us along a Los Angeles “gang tour” where former gangbangers serve as guides while tourists and youth groups ride an air-conditioned bus around disenfranchised neighborhoods.

What good is this tour except that it offers an afterward? You’re just a tourist inside someone else’s suffering until you can’t get it out of your head; until you take it home with you…So prepare yourself to live in it for awhile. Hydrate for the ride. The great shame of your privilege is a hot blush the whole time.

In the aptly titled “Pain Tours” essays, we look at poverty in Mexico, Joan Didion’s account of war-ravaged El Salvador, and a silver mine in Bolivia. She asks how much we can really know about these places and how we can understand and empathize with the people who live in them:

I think maybe if I walk the streets where someone was afraid, where an entire city was afraid, I’ll maybe understand the fear a little better. This is the grand fiction of tourism, that bringing our bodies somewhere draws that place closer to us, or we to it. It’s a quick fix of empathy. But always, always, we wake up in the morning and find we didn’t know at all.

Two of the essays deal with incarceration and the sense of loss and regret that comes from it. Jamison profiles her communication with an inmate, Charlie, whom she met previous to his incarceration for fraud. She often can’t figure out if their letters bring her closer to Charlie or define the gulf between them (him, in there; her, out here). The second essay deals with the West Memphis Three and the Paradise Lost trio of documentaries chronicling the men’s arrest, incarceration, and subsequent plea deal that set them free. She notes:

It hurts to watch the fluency of a body acclimated to its own shackling.

The collection really shines with her last essay, “Grand Unified Theory of Female Pain.” Jamison notes that we see wounded women everywhere, using prominent literary characters and authors to illustrate the point: Sylvia Plath, Anna Karenina, Mina in Dracula, La Traviata’s Violetta. Women’s pain is glorified, it turns them into martyrs, it makes them docile, it is fetishized, it is a requisite to female consciousness (Eve). She cites a 2001 study that showed that men are more likely than women to be given medication when reporting pain to their doctors. Women are more likely to receive sedatives. (Cue: rage.) There is also melodrama surrounding women’s pain: it is emotional, or psychogenic, or “not real”.

Jamison explores these loaded allegations in light of personal experiences and those of women in popular culture, literature, and everyday life. It’s such an enormous topic that she writes:

I find myself in a bind. I am tired of female pain and also tired of people who are tired of it. I know the hurting woman is a cliché but I also know lots of women still hurt. I don’t like the proposition that female wounds have gotten old; I feel wounded by it.

The whole collection is extremely well written and Jamison provides rare depth and insight to potentially saccharine topics and clarity on a somewhat ambiguous subject. She has a huge vocabulary on the human condition, and her descriptions of empathy, feeling, and communication are so on point that I really think that no one could say it better (there’s a reason why there are so many passages from the book in this blog post). Jamison has turned the personal topic of feelings into a fertile field of intellectual and compassionate examination. The cerebral writing may turn some folks off – it’s not a particularly easy read and her prose demands your attention and comprehension. However, the book has the ability to make each of its readers more humane, more knowledgeable, and more empathetic.