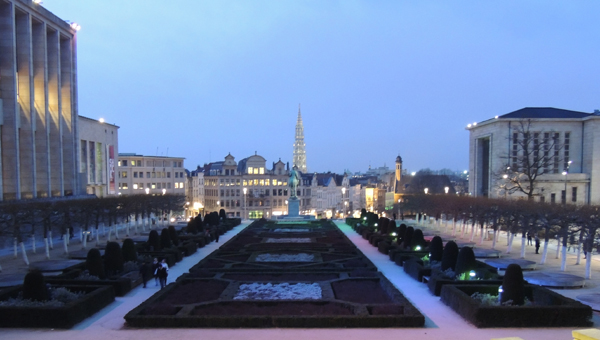 Will you let me talk about my winter Europe trip and show my dreary gray photos?

Eric had a work conference in Brussels and I jumped on the opportunity to tag along. Which, by the way, is a great cost-effective way to travel to a new city with another person – friend or significant other. Half of your total plane tickets are paid for, as is the hotel. We decided to make 10 days of it, and went to Bruges and Amsterdam as well. More on that later!

Brussels is full of decadent, fabulous food and is a small, charming city. Here are some tips on what to eat in Brussels and some practical items as well.

I had to look it up and felt dumb, but I then realized it’s common question. Brussels is the capital and largest city in Belgium, a small country in northwestern Europe. It is bordered by The Netherlands, France, Germany, and Luxembourg. It is also the capital of the European Union and headquarters of NATO, so expect stately and ornate government buildings in downtown. The city started as a 10th century fortress founded by a descendent of Charlemagne!

Brussels is also a convenient  hub for travel to other European cities. Trains to various destinations run frequently, as do flights out of Brussel’s main airport. A lot of folks use Brussels as a stop-off point between Paris and Amsterdam. How long should you spend in Brussels?

While Brussels is a cosmopolitan area with great food, nightlife, and museums, it’s also a small city and 2-3 days, or a long weekend, is a solid amount of time to get a feel for the place and see the sights. It is also very easy to get around Brussels. There are frequent metro, trams, and buses to the city center and the outer neighborhoods, and they are easy to navigate.

What language is spoken in Brussels?

The main language is French, although Dutch is common as well. English is widely spoken throughout the city, especially in the touristy areas.

Let’s get to the food: what to eat in Brussels

Brussels is known for its decadent food items: waffles, beer, chocolate, mussels, and frites. All are in great abundance around the city and generally of good quality. Here were some of my favorites:

Waffles, or gaufre (waffle in French):

The city center is swarming with waffle eateries. Belgium waffles are thick, doughy, chewy, and quite sweet – it’s more like a dessert than a meal. Waffles are usually topped with powdered sugar, whipped cream, chocolate, fruit, or lots of other yummy combinations. You can stay in the city center and still get a quality waffle. I went to one of the many stands on Rue de l’Etuvemany around Mannequin Pis and it was delicious. 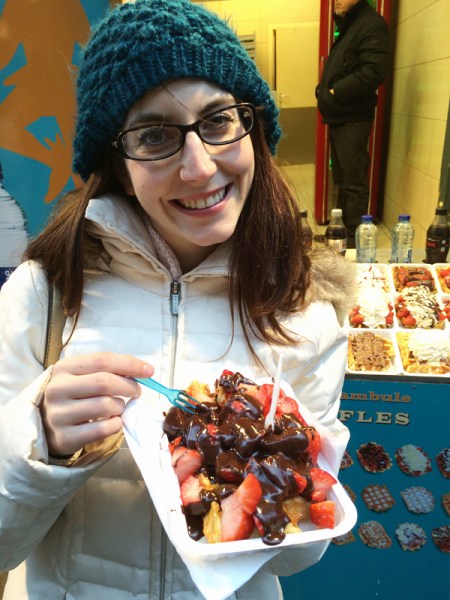 This is a happy girl.

Belgium fries are delicious, plentiful, and cheap ($4-$5 USD). They are served with mayo that is much fresher and better tasting than Hellman’s gelatinous goop. There are plenty of touristy places to find frites near the city center but the best frites stands are located in the outer neighborhoods (usually only a quick tram ride away).

Here are the following tourist and local favorites. Expect a no-frills snack stand, fries served in a cone, and long queues.

Brussels is an old, old city with a long beer tradition. In the Middle Ages, beer was actually safer to drink than water because of the boiling and fermentation process. There are over SEVEN HUNDRED different brews to choose from, and Brussel’s cafes and bars are usually informal and incredibly fun. They also have legit servers and bartenders who turn serving beer into an art form.

Lambic beer is a specialty of the region and is delicious. I was introduced to Kriek and Chimay (not a Lambic, but still Belgian) and they changed my outlook on beer. 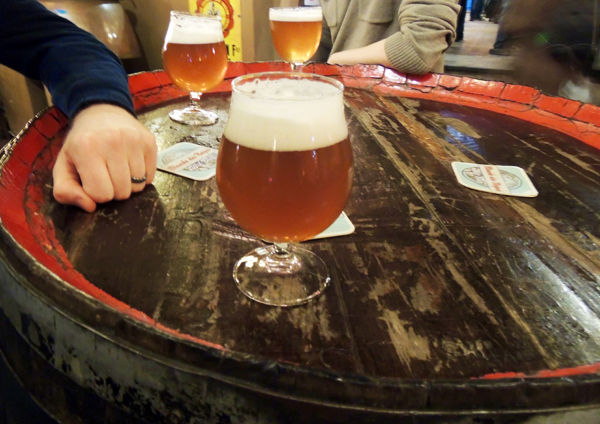 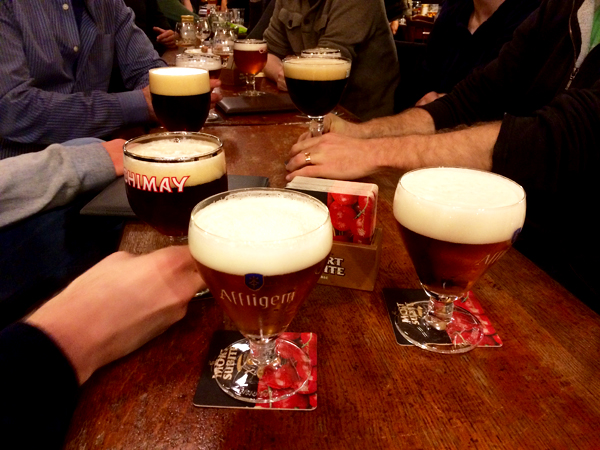 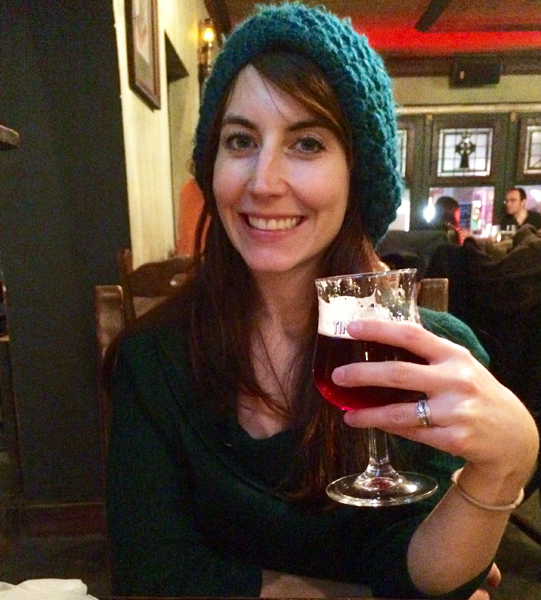 I think this is how I spent the better part of three days.

Here are a few places where you can find a great brew:

The Belgians take their chocolate seriously. The country is known for its incredible, high-quality sweets that come in many flavors and forms. 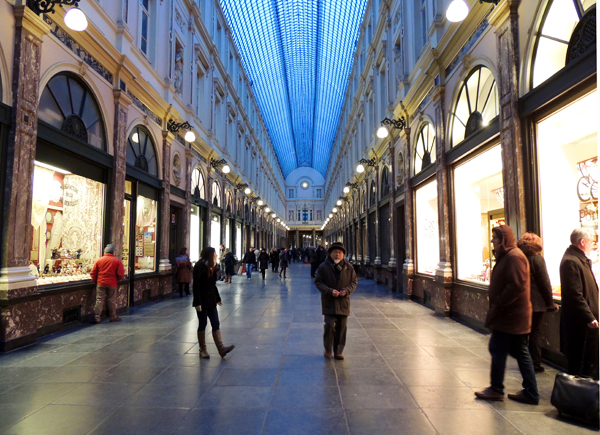 Remember that you can always buy chocolate to take home in the supermarket to save some money. It may not be as glitzy as the boutique chocolate shops, but it’s high quality and far better than what we have in the States. 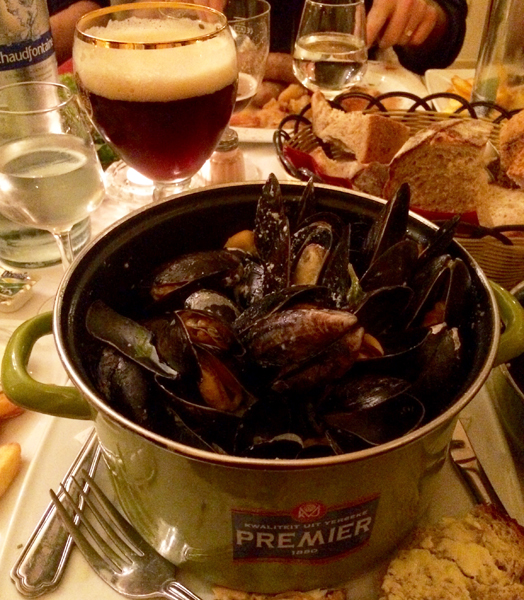 Belgians are FOR SERIOUS about their mussels. Mussels are a national dish and in season September through February. They are often served in an enormous pot with a side of frites and mayo *swoon*.

The restaurants I went to usually provided many choices of sauce: in garlic and wine, spicy, with heavy cream, etc.

Tune in next week for some tips on things to do in Brussels!

The New York Times explains how frites are more than just fries.