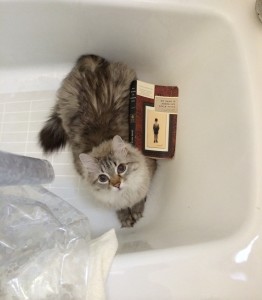 Rowdy has been spending a lot of time in the bathtub.

Ahh this book. This book. It’s not a happy novel, or one with a promising ending, or one that’s particularly optimistic. However, I continually find myself coming back to this novel (or suggesting it to others) when I want to read something that is well-written, inclusive, and filled with love. I believe that literature can be a comfort in the same way as a particularly moving piece of music or an embrace from a loved one. This book comforts me.

Asher Lev is a Hasidic Jew growing up in post-World War II Brooklyn. He is the only child of two conservative and prominent members of his community, which is led by a charismatic and wise leader called the Rebbe. Asher Lev keeps kosher, believes in the Ribbono Shel Olom (the Master of the Universe), and prays the Krias Shema every night.

Asher was also born with a gift, which he began using at a very young age – he is an exceptional artist. I am not using the word “gift” lightly. Potok portrays Asher’s talent and yearning for his art in an almost primal sense. Further, Asher is adamant in drawing and painting the world as he sees it. Sensitive, observant, and truthful, Asher refuses to compromise his art for the sake of beauty or comfort even at a very young age:

“What is that on my face?” she asked, looking at one of my summer drawings of us walking through the Brooklyn Botanical Gardens.
“Those are the spots, Mama.”
“What spots, Asher?”
“The wet spots, Mama. When it’s hot, there are the wet spots.”
After a moment, she said, “But why didn’t you draw the pretty birds, Asher? And the flowers, Asher, why didn’t you draw the flowers?”

Being an artist is not something that is encouraged or accepted by Asher’s family or most of his community. Asher does poorly at school and has few friendships. Although he adores his parents, there is often tension with his strict, traditional father. Asher spends almost all of his time drawing or painting, and is fascinated with emotional, almost macabre subjects (he befriends an old man, Yudel Krinsky, a recently emigrated Russian Jew who lost his entire family). When Asher is old enough, the Rebbe, noticing the depth of Asher’s talent, pairs him with a famous and powerful painter, Jacob Kahn. Jacob Khan warns Asher that he will not have an easy life:

“Do you have any idea at all what you are getting into?”
“No.”
“Become a carpenter. Become a shoemaker.”
I was quiet.
“Become a street cleaner.”

Under Jacob Kahn’s mentorship, Asher’s talent grows and flourishes, as does his desire to express himself and create increasingly diverse works of art (nudes, Christian motifs). His art challenges his relationships with his family, community, culture, and religion.

Potok, an American author and a rabbi, gives the reader a detailed and intimate portrait of a Hasidic family and their community – a community that most people may not know much about. (Potok’s earlier novel, The Chosen, was the first book from a major publisher to portray Orthodox Judiasm in the US.) Potok explores the characters’ profound faith and their commitment to the Jewish people, and how that translates to their beliefs, actions, and community. Asher’s father works for the Rebbe and makes trips to Russia – an unknown and turbulent place in young Asher’s eyes. The novel touches on the persecution of Soviet Jews, including the Night of the Murdered Poets. Because Potok does such a deep and detailed job of portraying this faith, along with the turbulent times for Jews in the post-war era, the reader understands how Asher’s art, and his adamant pursuit of this other, outside world, is seen as blasphemy, and a betrayal of his people.

The days are getting longer, the afternoons are getting darker. Do yourself a favor and pull up a warm blanket and read about Asher Lev.

I just discovered that there’s now a play!