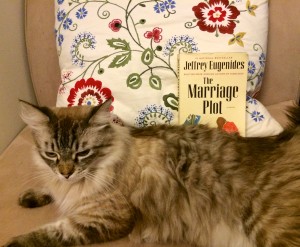 Hiro neither sits still nor looks at the camera.

This book received a lot of press when it came out in 2011. Jeffrey Eugenides had received the Pulitzer Prize for fiction, as well as a bunch of other awards, in 2003 for his second novel, Middlesex (which is fantastic). He is also the author of The Virgin Suicides. So, obviously, there was a lot of hype/pressure surrounding this book.

The Marriage Plot sets out to explore the theme of the marriage plot through the perspectives of three recent Brown University graduates:

The story follows the three protagonists through their first year post-college in the early 1980’s, with occasional flashbacks to their time at school. A kind of tortured love triangle persists among the three characters.

Eugenides spends the first part of the novel detailing Madeleine’s love of Victorian literature and her engagement in literary theory. She is enrolled in Semiotics 211, a dense theory/philosophy course. Leonard and Madeleine meet in this class, which serves as a symbolic foundation to their relationship. Eugenides spends a lot of time portraying the class – having the characters discuss theory and give examples. While it is clear that the author is using the semiotics teachings to lay the groundwork for the story, I thought the philosophy element was way overdone. All the Semiotics talk was repetitive and boring and I think the theory is too lofty and confusing for some readers (including me).

The intellectual journeys that the characters undertake throughout the book are the true highlights of the novel. The most conspicuous is Mitchell’s journey, first in Europe, then in India, including the painfully realistic descriptions of his time in the Home for Dying Destitutes in Calcutta. We learn about his deep curiosity and respect for religions and customs, especially Catholicism, and how he tries to relate these religious teachings to his own life, through his good works and his relationship with Madeleine. The religious element of Mitchell’s character is unique and interesting, and something I don’t often see portrayed in contemporary novels. Mitchell’s constant forlorn state, his overbearing and slightly obsessive love for Madeline, and his braininess, often at the occlusion of happiness, makes him a realistic character.

Leonard is not featured as prominently through the book as Mitchell and Madeleine, which is a shame, as he is both a fascinating and heartbreaking character. We learn of his years-long battle with mental illness and the dehumanizing effects of the medications that he has to take in order to function. While Mitchell and Madeline have recurring chapters dedicated to them, we only get a glimpse into Leonard’s thoughts and background. He serves as a foil to the two more main characters.

Madeline is our main character as her story is the most prevalent (the book starts and ends with her perspective), although I thought that she was the least interesting of the three. She is from a wealthy family and does not have to work after college. She appears ungrateful to her supportive yet overbearing parents. She also takes advantage of Mitchell, using his adoration and friendship as a crutch when she is upset. She also spends the novel obsessing over Leonard, trying to turn him into something he is not, a trait that irritates me in female characters. Out of the three protagonists, I thought her character was the weakest.

My main criticism of the book is that I don’t think the marriage plot theme came together in the end. I feel that if you are going to title the book as such AND make your three main protagonists have a love triangle AND make me swamp through 100 pages of interwoven ethics philosophy, then I want it to be very apparent how the theme relates to the story. I thought there were too many obscure references that circumvented the theme of contemporary marriage than dealing with it head-on. I want to be hit over the head with it. Maybe I’m a simpleton? Whatevs, I like my fiction clear and tidy.