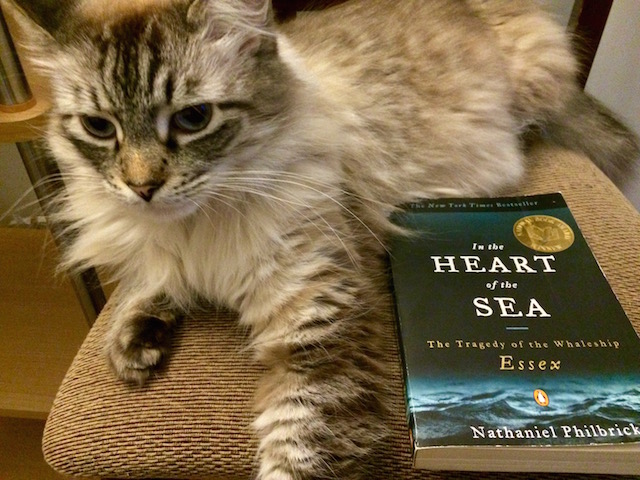 True Story: In 1819, the 238-ton whaleship Essex was attacked and sunk by a sperm whale in an isolated area of the South Pacific. The 20-man crew set out in three small boats to try to reach the coast of South America (the place they deemed safest). By the end of the journey, the boats had separated and only eight of the 20-man crew had survived, each through various and often horrific means. This is a passage from the book’s preface:

First they saw bones – human bones – littering the thwarts and floorboards, as if the whaleboat were the seagoing lair of a ferocious, man-eating beast. Then they saw the two men. They were curled up in the opposite ends of the boat, their skin covered with sores, their eyes bulging from the hollows of their skulls, their beards caked with salt and blood. They were sucking the marrow from the bones of their dead shipmates.

Interestingly, the tragedy of the Essex was as well known in its day as the Titanic is in ours, and inspired Herman to write Moby Dick. The story of the Essex has largely faded from public memory, but through extensive research (including primary sources) and with an apparent passion for all things sea-faring, Mr. Philbrick has brought this remarkable story back to our consciousness.

The story of the Essex is less an adventure story than one of tragedy and survival. People have always had a fascination with disaster and loss, and even more so with tales of improbable, desperate survival. Mr. Philbrick covers all bases on this topic – we hear about a man who survived for seven days in the Arizona desert without food or water, the effects on participants in a benchmark study on starvation after World War II, and instances of cannibalism throughout history. These passages aren’t necessarily meant to be sensational, but rather help put to put the men’s suffering into context. One of the survivors later noted: “our suffering during these calm days almost exceeded human belief.”

Here is one of the grisly passages:

The Essex survivors had entered what McGee described as the “cotton mouth” phase of thirst. Saliva became thick and foul-tasting, the tongue clings irritably to the teeth and to the roof of the mouth. Even though speech is difficult sufferers are often moved to complain ceaselessly about their thirst until their voices become so cracked and hoarse that they cannot speak no more…Severe pain is felt in the head and neck. The face feels full due to the shrinking of the skin. Hearing is affected, and many people begin to hallucinate.

It gets worse from there.

Mr. Philbrick tracks the deaths of each of the crewmembers with detail and compassion. What could have been a lurid and sensational tale about the worst aspects of humankind turns into a sobering, well-researched, and thoughtful account of the tragedy and subsequent aftermath. I found his treatment of race to be particularly interesting. With one exception, the first men to die were all of the African-American members of the crew. Mr. Philbrick gives good weight to the factors that caused their early deaths including an inferior diet, being put into the worst of the boats, more manual labor tasks prior to the sinking, etc.

The tale of the Essex might feel incomplete without noting the historical and economical importance of whaling in the 19th century, and Mr. Philbrick covers this topic extensively. (Did you know that a typical whaling expedition to the South Pacific took an average of 2-3 years? Crazy!) The construction of a whaleship, maritime navigation, hierarchy of the crew, Nantucket commerce in the early 19th century, what the whaler’s wives did while they were gone – there isn’t much Mr. Philbrick doesn’t examine. There are smooth transitions between the material, with engaging scenes of the tragedy interspersed with explanations, examples, and history. The book isn’t tied down by tedious technical detail and the story moves along at a nice clip. You can tell Mr. Philbrick is a true marine buff – he includes 50+ pages of footnotes at the end if you want to learn more.