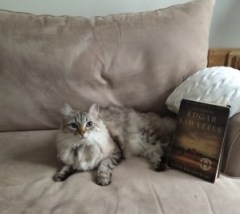 Rowdy curling up with Edgar Sawtelle.

I read this novel a few years ago when it first came out and re-read it recently because I wanted to review it for the blog. In case you’ve read it and were confused by the ending, or if you’re going to read it, I’ll let you in on a secret: it’s a retelling of Hamlet. Surprise! Who figured it out on their own? I totally didn’t. (I’m not giving anything away – any review or info on this book has mentioned it.) I was disappointed in my lack of literature/reasoning/connection-making/comprehension skills until I talked with a few of my very bright and perceptive English major friends and they didn’t make the connection either. Looking back, I don’t know how I missed it when the ghost dad came into the picture.

Edgar Sawtelle is born mute, although his hearing is fine. He is 14, an only child, and his family raises and trains a fictional breed of dog. Their peaceful life is upended with the arrival of Edgar’s uncle, Claude, and later, the sudden death of his beloved father.

The novel takes place in the 1960’s in the Midwest. The story is completely, and uniquely, an American story, and I mean that in the best way possible. The author sets each scene by intricately describing the Midwestern landscape, the apple tree outside the house, the large barn that houses the dogs, the old store clerk, and the temperamental weather. And the dogs. If you are a dog lover, your affection for this novel will be magnified. Almondine, the Sawtelle’s family dog and Edgar’s extraordinary companion, is a central character in the story. Some chapters are even told from her point of view. Edgar and Almondine’s relationship goes far deeper than just pet and owner. She has looked after him since he was an infant, they grew up together, they have their own language, they are described as being as cut from the same essence, the same soul. From Almondine’s last chapter:

“She had learned, in her life, that time lived inside you. You are time, you breathe time. When she’d been young, she’d had an insatiable hunger for more of it, though she hadn’t understood why. Now she held inside her a cacophony of times and lately it drowned out the world. The apple tree was still nice to lie near. The peony, for its scent, also fine. When she walked through the woods (infrequently now) she picked her way along the path, making way for the boy inside to run along before her. It could be hard to choose the time outside over the time within.”

While the story arc loosely follows that of Hamlet, it is done in such an interesting and unusual way that the connection is not overt, but rather merely suggested. Further, the characters are masterfully drawn and nuanced. I can’t say I’ve known anyone like Edgar; Almondine; his mother, Trudy; his friend, Henry; but that doesn’t make the characters any less believable or authentic. The real treat for the reader is experiencing Edgar’s heartbreaking and personal journey in the wake of his father’s death, his need to expose the truth, his adventure away from home, and the utter chaos of his return. Although he is mute, Edgar is more expressive and profound than the most loquacious characters. Further, I don’t think I’ve ever read a character whose nature is so righteous and good.

The Story of Edgar Sawtelle is long and inviting, the writing is excellent and direct, and the story is completely engaging.