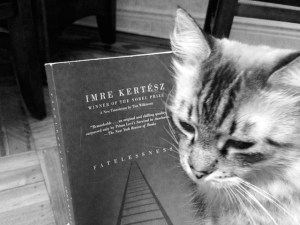 I bought this novel at Hobart International Book Port in the Hobart Book Village (aka the best place ever). The book port specializes in fiction by authors from around the world, including Nobel Prize winners, international bestsellers, and foreign language books. Reading Fatelessness is the beginning of my attempt to read more foreign literature – works by authors that are not American or British.

Since I’m assuming that this book is little known in the US (I had never heard of it), bear with me while I provide some background. Imre Kertész is a Hungarian author who was born in 1929. He is a Holocaust survivor, first imprisoned at Auschwitz then later Buchenwald. Fatelessness, published in 1975, is his first and most well known novel. Kertész won the 2002 Nobel Prize in Literature; the committee noted that his writing upheld the “fragile experience of the individual against the barbaric arbitrariness of history.”

Fatelessness is based on Kertész’s experiences in concentration camps, although he denies a strong biographical connection to the work. The story centers on 15-year-old György Köves, a typical teenage boy living in Budapest. He has a large group of friends, a crush on the cute neighbor girl upstairs, and is weary of the increasing political and societal changes that he hears his older relatives speak about. The novel begins with his father’s last night at home before reporting for assignment at a labor camp.

Some time later, on the way to his assigned work, György’s bus is stopped on the middle of the road. The group, consisting mostly of teenage boys, is assigned to a holding room, then put on a train bound for Auschwitz, where they are given little food and water. There, he lies about his age, saying that he is 16 and able to work, unknowingly saving his life. Over the course of one year, he is transferred to Buchenwald, then to Zeitz, a labor camp. He becomes critically ill and is transferred to a hospital facility within the camp. He remains there throughout his captivity and witnesses Buchenwald’s liberation.

Kertész paints an extremely detailed account  of György ’s experiences, especially in the beginning – being stopped on the bus, the long train ride to the camp, the intake process into Auschwitz, and his first few days there. Through these clear, matter-of-fact descriptions, the reader also witnesses György’s painful, horrifying descent as his time in the concentration camp proceeds: incessant hunger, beatings, gaping wounds that do not heal.

What struck me the most about György ’s story, and his character in particular, is his attempt to describe what was going on around him, think through it, and try to make sense of it – the horrors, the atrocities, the inhumane things that happened. All of the events and experiences are, by their nature, senseless things, but György holds on to his rational thoughts. His matter-of-fact descriptions and realism somehow make the atrocities even more horrifying.

György innocence quickly fades away. During his time in the camp, we learn that he pretends that his dead bedmate is still alive so he could collect his food rations. When soldiers march into the hospital and ask for his name, he stays silent while another boy is mistakenly taken away. We learn that experience is relative in the camp:

I can report that, after so much striving, so many futile attempts and effort, in time I too found peace, tranquility, and relief. For instance, certain things to which I had previously attributed some vast, practically inconceivable significance, I can tell you, lost all importance in my eyes…Cold, damp, wind, or rain were no longer able to bother me; they did not get through to me, I did not even sense them. Even my hunger passed; I continued to carry to my mouth anything edible I was able to lay my hands on, but more out of absentmindedness, mechanically, out of habit, so to speak. As for work, I no longer even strove to give the appearance of it. If people did not like that, at most they would beat me, and even then they could not truly do much harm, since for me it just won some time: at the first blow I would promptly stretch out on the ground and would feel nothing after that since I would meanwhile drop off to sleep.

I admit that I had a hard time writing this review because this is a very serious book about a very serious topic. Translated from Hungarian, Fatelessness is not the easiest read. It has long pages of descriptions, walls of text, and dialogue is sparse. Some part are intricately detailed while others, due to the narrator’s declining state coupled with the difficult, horrible things he is witnessing, are hard to decipher.

I’ll leave you with this: the clear descriptions and György’s refusal to mitigate these events lead to some poignant parts in the novel. While he is sick and near death, someone asks him: you still want to live?

Despite all deliberation, sense, insight, and sober reason, I could not fail to recognize in myself the furtive and yet – ashamed as it might be, so to say, of its irrationality – increasingly insistent voice of muffled craving of sorts: I would like to live a bit longer in this beautiful concentration camp.

Here is an interview with Kertész in the Paris Review.