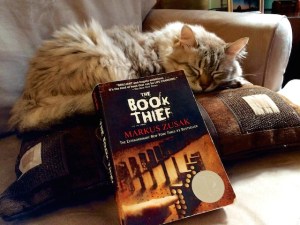 I’ll be up-front: this book is fantastic. A magnificent story, incredible characters, powerful imagery, and an enlightening look into a turbulent and heartbreaking part of history, The Book Thief has become my new go-to novel when people ask me to recommend something to read.

The Book Thief is written from the perspective of Death. It was a big risk on the part of the author and it has paid off. Unlike the traditional image of death – a skeleton in a dark hood with a scythe – Death is largely benevolent. It is a comforting, calming presence that gently takes suffering souls into its arms. However, The Book Thief takes place in the late 30’s and early 40’s in Nazi Germany, a time of great fear and war. Death is exhausted, weary, and disheartened:

They say that war is death’s best friend, but I must offer you a different point of view on that one. To me, war is like the new boss who expects the impossible. He stands over your shoulder repeating one line, incessantly: ‘Get it done, get it done.’ So you work harder. You get the job done. The boss, however, does not thank you. He asks for more.

Another powerful quote from Death that sums up war:

Death meets Liesel Meminger, our book thief, while coming to take her younger brother in the winter of 1939. Liesel is nine-years-old and travelling with her brother on a train towards Munich where they will be put in a foster home. We learn later that their father is absent and their mother was a suspected Communist. On the train, Liesel watches her brother die. The train stops a few towns away and Liesel and her mother disembark so they can bury her brother. On the cold ground by his grave, Liesel discovers that one of the grave diggers left behind a book: The Grave Digger’s Handbook. So begins her first act of book thievery.

Liesel continues on to her foster home in Molching, a small town outside of Munich. Her foster parents – short, stout Rosa Hubermann with a sharp tongue and surprising capacity for love, and Hans Hubermann, an honest, kind, and patient accordion player – are some of the most vivid and beautifully drawn characters that I’ve ever read. Along with Liesel’s best friend Rudy, a spunky, caring boy whose idol is Jesse Owens, and Max, the young Jewish man that the Hubermanns hide in their basement, Zusak’s characters are as loveable as they are unforgettable. In an interview with the author at the end of the book, Zusak talks about how he missed Liesel, Rudy, the Hubermanns, and Max when he was finished writing the novel. I can attest, that as a reader, I miss them too.

This heartbreaking story is told through unusual and oddly moving scenes: Rudy painting his face black and running around the town’s track to mimic Jesse Owens, the snowball fight between Liesel and Max in the basement, Hans Hubermann gently teaching Liesel how to read from The Grave Digger’s Handbook in the middle of the night, Liesel calmly reading to her neighbors huddled in the bomb shelter, Rosa Hubermann’s quiet prayers over her husband’s accordion, and Death softly, gently gathering up the souls of children, Jews, and American soldiers alike. The scenes are as original and creative as they are deeply moving.

There is a lot of literature from this time period that focuses on the perspective of the Holocaust victim: Night by Elie Wiesel, Fatelessness by Imre Kertész, The Diary of Anne Frank, among many others. Zusak’s novel focuses on common Germans citizens, offering a different perspective. The novel humanizes Germans during this time. While Zusak portrays some Nazi sympathizers, many of the book’s characters did not agree with the regime, did not want to fly the Nazi flag, thought that Hitler Youth was boring and ridiculous, and saw Jews as friends, neighbors, people. The novel did a powerful job of explaining the fear that surrounded living in Nazi Germany – if you were suspected to be a Jewish sympathizer you were subject to severe punishment, if you did not register with the SS you lost your job, your home, your children. Scenes of the bomb raids were particularly compelling and vivid.

A lot of the literature painstakingly describes the horrors in Europe during this time period. While those are important, I somehow felt that the quiet subtlety of this novel, young Liesel’s story, and the remarkable characters made more of an impression on me than many of the other works. The violence, fear, and heartbreak did not feel so far-fetched and unrealistic.

The Book Thief is technically listed as a young-adult book, which is unfortunate because it may put some people off from reading it. It is very much an adult book about children and teenagers trying to find joys and pleasures in a time of war. A must-read for young adults and older adults alike, Zusak’s novel is really a celebration of goodness, and life.