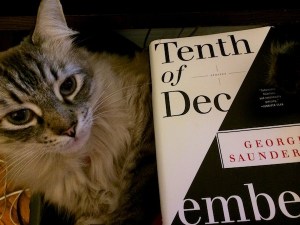 I can’t believe a week has gone by without posting! I hate not updating the blog for that long. I started a freelance job in an office last week and that, along with some doctors appointments and other work, left me with little time for fun stuff (like writing book reviews!).

But on to George Saunders. I bought this collection of short stories a few months back had been hanging onto it for awhile. I even took a first stab at reading it last year but had put it down (it’s not an easy read). However, I put it on my To Read List, as it was named on almost every “best books” list of 2013.  When this collection came out, I distinctly remember the NY Times Magazine declaring,  ”George Saunders has written the best book you’ll read this year.” My verdict?  It was good, but that praise is a little high for my taste. Here’s why.

George Saunders is not for everybody. As mentioned above, Tenth of December is not an easy read. The stories are dense, the language isn’t easy to decipher, and he often dives right into the story without giving context or placement. The stories demand your absolute attention as important plot points and explanations are buried in a whirl of text, description, or dialogue. For most of the stories, I was completely bewildered until almost the end, when I finally realized what was happening. Then I had to go back and re-read.

That being said, there were plenty of positive aspects about this collection. George Saunders’s writing is extremely imaginative and original. As a writer, it’s inspiring to read stories that feature such creative language and presentation. Want to write a story that is told through a single email? George Saunders did that. Want to flippantly end lists of adjectives with etc., etc., and have the reader know exactly what you are talking about? Yup, he did that. Want to introduce an essential character or plot point using an unexplained abbreviation and only clarify it at the end of a 25-page story? Yes, that happened. There aren’t many boundaries here. It’s quite refreshing.

Lastly, as lofty as the language and presentation is, the stories showcase characters and situations that are very down to earth. Saunders explores a wide and varied range of characters that are completely human in  their flaws and struggles. In the first story, “Victory Lap,” a boy witnesses a violent crime next door and must decide how to react under the pressure of his oppressive parents. In “Home” a soldier returns from combat and must reconcile his past experiences with his current and troubled family life at home. The beautiful title story profiles a cancer patient who goes into the freezing woods to die, only to encounter a young boy in trouble who makes him rethink his life.  “Exhortation,” told entirely through a single email from a boss to his subordinates (subject: RE: March Performance Stats) is downright hilarious. Two of the stories, “The Semplica Girl Diaries” and my favorite story, “Escape from Spiderhead,” have a surprising and well-done science fiction element.

Give Tenth of December a try. It may be for you, or it may not. But it will certainly expand your perception of what a short story can do.