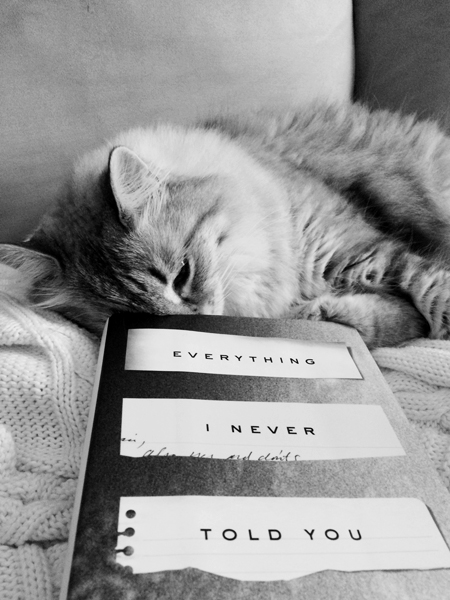 Everything I Never Told You not only appeared on all the best books lists of 2014, but it was often cited as the best book of the year. If folks couldn’t decide on a single best book then they cited it in the top five.

This is both a blessing and a curse – the book got a lot of press and attracted a lot of readers, but it also had to hold up to inflated expectations.

It’s a solid novel, for sure, and the fact that it is a debut novel is amazing. It’s well-written, deals both delicately and emphatically with a variety of heavy topics – loss, race, culture, family, sexual identity, death – and it’s deliciously fast paced. The book grabs you from the beginning and sucks you in. It doesn’t let go. Here is the first line:

Lydia is dead. But they don’t know this yet.

16-year-old Lydia is the middle child of a Chinese-American family. The story takes place in Ohio in the 1970’s. Everything I Never Told You opens with her family realizing that she is late for breakfast one ordinary morning. Her room is empty, the bed has not been slept in, and her belongings are tidy with nothing amiss. You spend the whole first chapter on edge, because you know what’s coming and you anticipate the pain and horror that this nice family is about to endure.

The police drag Lydia’s body out of the lake by chapter two and the questions begin – how did she die? Was it a suicide or murder? What was going on in her life? Did she have lots of friends or was she a loner? Was she happy with her studies or did she carry the heavy burden of her parent’s expectations? Would anyone have a motive to kill such a sweet, innocent, young girl? Questions, and the need to know why, inevitably follow a tragedy of such proportions.

As the story unfolds, we naturally learn more about Lydia – the person she was, what she may have been hiding, and finally, what happened to her. However, Ng doesn’t just focus on Lydia – she explores the characters and dynamics of the whole family, and how each affect each other. Marilyn, Lydia’s feminist mother, wants her to be a doctor and have the opportunities that she was denied. James, Lydia’s professor father, wants her to have an active and popular social life, something he struggles with. Her older brother, Nath, wants out of the house ASAP. And her sweet younger sister, Hannah, observes this all.

The book also delves into the concept of race. James is first-generation Chinese, with his parents emigrating from China, while Marilyn is white. Their children are the only mixed-race kids in their school; this was especially unusual in an era when interracial couples were not common. Ng, who also grew up in a Chinese-American family, treats the issue with sensitivity while not minimizing the impact on the family and their community.

Of course, the book also deals with an event of profound loss, and the grief, anger, and confusion that follow. As with many families, the ties between its members hang in a delicate balance, and this catastrophic event sends everyone into a tailspin. We not only see loss, but we get a deep and precise look into the healing process.

The book does have some flaws, however. Some characters, most prominently Hannah, are not fully developed. She’s a patient observer but not particularly realistic. I also thought that a few plotlines were weak and not filled out. However, the book is beautifully written, as if Ng has been doing this forever. The best part of the book are the characters – they shine, and are both sincere and true.