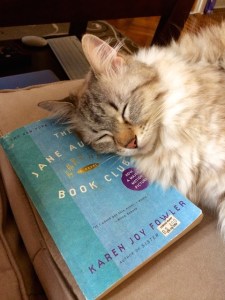 This book was boring so Rowdy fell asleep on it.

Guys, this wasn’t good. The weak comparisons to Jane Austen’s famed works aside, the novel suffers from unmemorable, clichéd characters, a slow pace, and a thin plot. The Jane Austen Book Club is shallow chic lit at its core, trying to parade as something more serious.

In full disclosure: I’m female and was an English major, so of course I’m a Jane Austen fan. A requirement of my college’s English major was that we take a class focused on just one author. Super boring authors were offered in my lower years, (Herman Melville, Goethe). I held out until my senior and was rewarded because Jane Austen appeared on the class roster, and as a senior I had priority so I didn’t get locked out of the class!

We covered all of Austen’s six novels as well as her two uncompleted works, The Watsons and Sanditon. It was a whirlwind class but it gave me an appreciation of Austen’s brilliance and inventiveness in her work within the contexts of the society she was writing about. Austen is known for her wit and humor, her sarcastic yet intelligent take on society, and her nuanced and quiet feminism. We spent the first class talking about the opening line of Pride and Prejudice and how it is one of the best-written lines in fiction:

It is a truth universally acknowledged, that a single man in possession of a good fortune, must be in want of a wife.

It may not seem like much now but she was one funny and smart lady.

So I was excited about The Jane Austen Book Club and I really wanted to like it. The premise is simple: set in California’s central valley, there are six members of the book club: five women and one man. Each chapter is dedicated to a character and told from their point of view. The chapters also highlight one of Austen’s novels (Chapter One in which we gather at Jocelyn’s to discuss Emma, Chapter Five in which we read Pride and Prejudice and listen to Bernadette). For those unfamiliar with Austen, the book conveniently contains a background and synopsis of the novels in the back.

“Each of us has a private Austen,” the book begins. Jocelyn, a fifty-something woman who has no children and has never married, seems to like her breeding dogs more than she likes most people. “Jocelyn’s Austen wrote wonderful novels about love and courtship but never married.”

Bernadette, an older and loquacious woman, has found peace and is satisfied with her life. Her Austen is a comic genius.

Sylvia, Jocelyn’s best friend since childhood and a recent divorcee, saw Austen as a daughter, friend, aunt – an acute observer of people.

To Allegra, Sylvia’s beautiful, blunt lesbian daughter, “Austen wrote about the impact of financial need on the intimate lives of women.”

Prudie, the youngest of the group and a high school French teacher, thought that Austen changed every time you read her.

No one knew who Grigg’s Austen was. He is the only man in the group and arouses suspicion in the other women.

With this tidy setup, Fowler looks into the lives of the characters, each grappling with their own struggles. The problem is that the characters are really not that interesting. They are clichéd – the blunt lesbian, the unmarried 50-something who breeds dogs, the messy, yoga-obsessed older woman – and it doesn’t feel like they undergo significant growth in the course of the novel. Although the chapters included bits about the characters’ past, there was a lack of depth in the character development. I didn’t feel a connection to any of Fowler’s characters.

The story is as unremarkable as the characters. I got the feeling that Fowler created the concept of the book club, then created the characters, but didn’t know what to do with them. The pace of the book is slow and there are a lot of unnecessary story lines that do not advance the plot. At the end of the novel, you’re left thinking, who cares?

The biggest criticism I have is the weak comparisons and interpretations of Austen. Although each chapter is linked to an Austen novel, I don’t think the parallels are readily apparent – they’re a stretch. I’m guessing that the point was to take Austenesque characters and put them in modern society. However, Fowler doesn’t write like Austen – her prose lacks the wit, critique, observation, and subtlety that Austen had.

While it’s certainly not an enviable position to be put side-by-side with Austen, a novel like this invites comparisons. The Austen element is the only thing that makes The Jane Austen Book Club remotely appealing but it can’t make up for the inferior story, characters, and pace.