After a whirlwind three days of traveling around the south of Ireland, we settled in for a cozy 3 nights in Galway at the Almara House. I can’t say enough good things about this B&B. Nestled in a suburb about 15 minutes east of the city center, the Almara House has spacious rooms, offers a luxurious two-course breakfast, and is run by the kindest, most welcoming couple. I mean, look at this morning goodness: 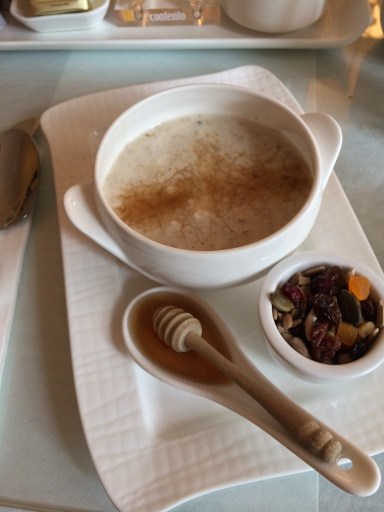 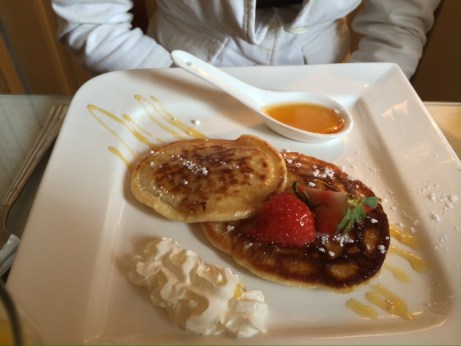 We left ourselves a whole day on the itinerary to explore Galway, which was definitely enough time. A small, charming university city on the west coast, Galway serves as a convenient base for other destinations, such as the Cliffs of Moher (an hour and a half drive), the Aran Islands (buses depart from the city center to the ferry docks), the Burren, Connemara, and points north.

We spent the whole day downtown, starting with the Galway City Museum, which is free and provides some history of the city and the surrounding areas. Quay Street (the main shopping area), the Spanish Arch, and Eyre Square is a nice stroll and will give you a good feel for the city. We took buses everywhere; the bus system is very easy and the drivers are friendly and willing answer questions. 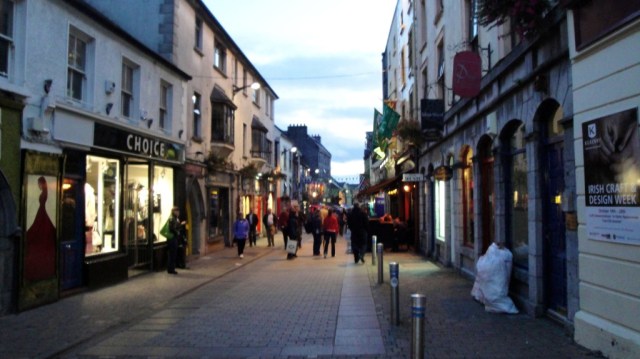 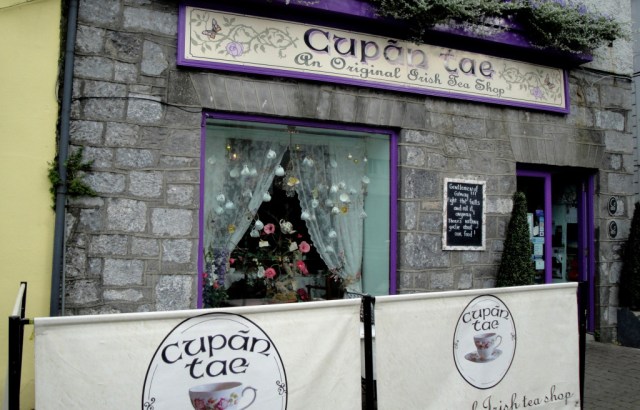 He saw this sign out front and was sold on lunch and tea: 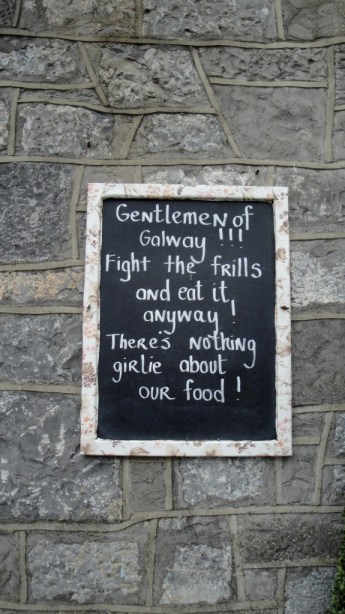 I couldn’t get enough of this place! It’s like going to tea at Grandma’s house – if your Grandmother is the Queen of England and the year is 1910. The waitresses wore frilly aprons, each table was set exquisitely with its own tea pot, sugar cubes, saucers, etc., and they have a long and varied selection of teas and lunch foods. 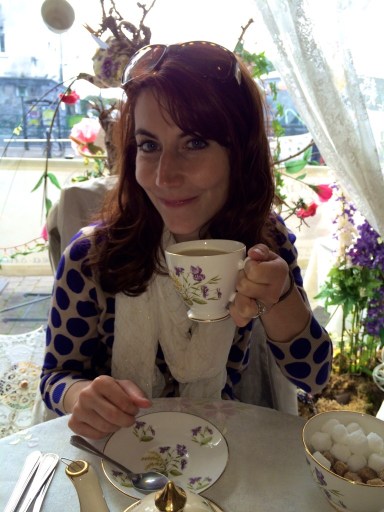 I had read good things about the Salt Hill Promenade, which is located along the beach on the other side of the river. While it’s a big tourist destination, I also saw plenty of locals – dog walkers, moms with strollers, and joggers. The promenade provides beautiful views of the bay and the Aran Islands. A bunch of cute shops and restaurants line the promenade. 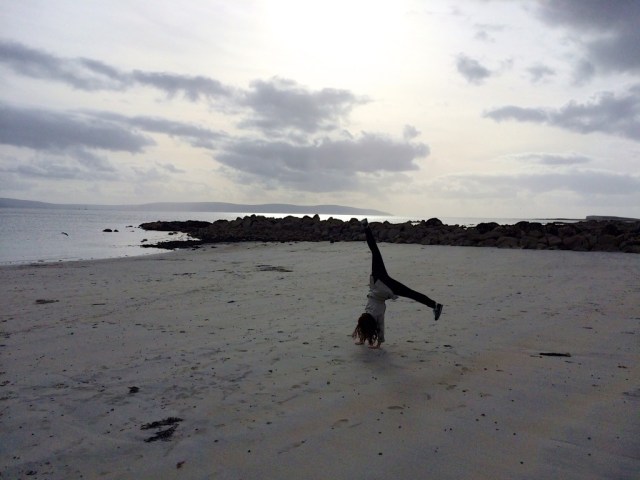 Cartwheels on the beach – look at that form! 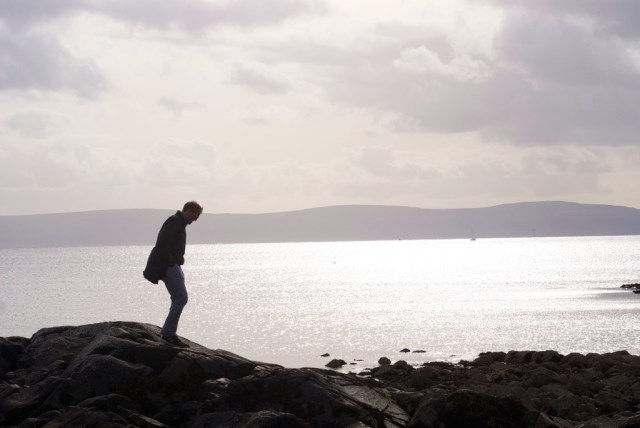 On the beach, with the Aran Islands in the background.

As I mentioned before, Galway is a small city and easy to explore in a day. We had some time on our hands before dinner and we decided to see a movie. I had heard about a documentary called The Irish Pub on the radio that morning.

In the documentary, Alex Fagan, the writer and director, explores the Irish pub as a tradition and an institution, and interviews bar owners around the country (north and south) about what the pub means to them and to the community. It was a fascinating peak into the Irish pub experience, as well as the great oral traditions, memories, and warmth that encapsulate this important and uniquely Irish institution. One thing that struck me about the film was its gentle commentary and insight into the Irish philosophy and way of life. One traditional Irish song, played in the movie by a few bar musicians, exemplified this:

Come by the hills to the land where legend remains.
The stories of old fill the hearts and may yet come again,
Where the past has been lost and the future is still to be won;
And the cares of tomorrow can wait till this day is done.

(The song is Come By the Hills. Here’s that guy from Glee singing it.)

We ended our Galway day with a terrific dinner at Quay Street Kitchen, which had fresh food and plenty of veggie options (thumbs up to the vegan fish and chips). 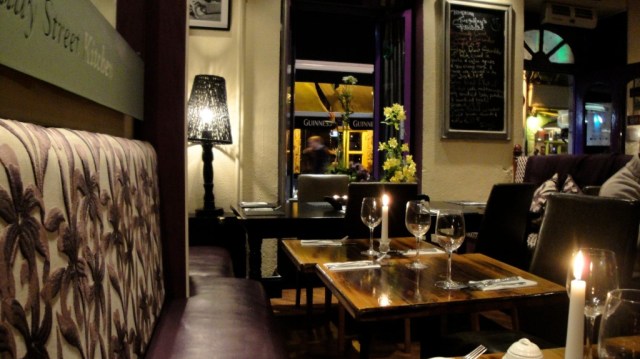 A friend told me that the Aran Islands were a must-see. “Yes, yes, yes, please do the Aran Islands,” she said. “They are so romantic, especially for a couple. You’ve got to go.”

You can’t argue with that. And she turned out to be so very right. 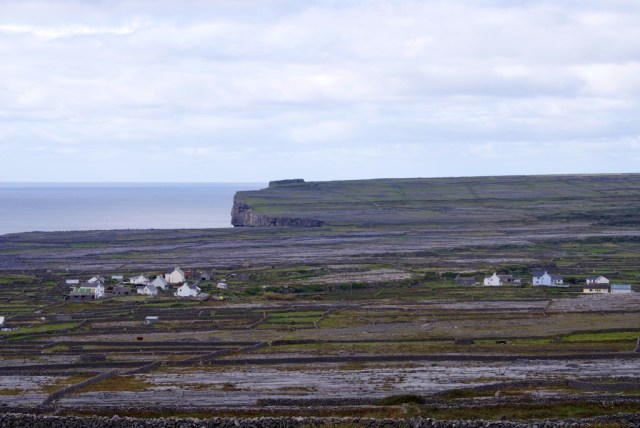 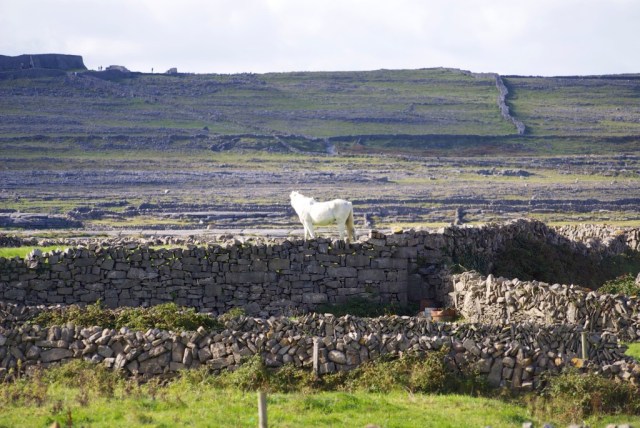 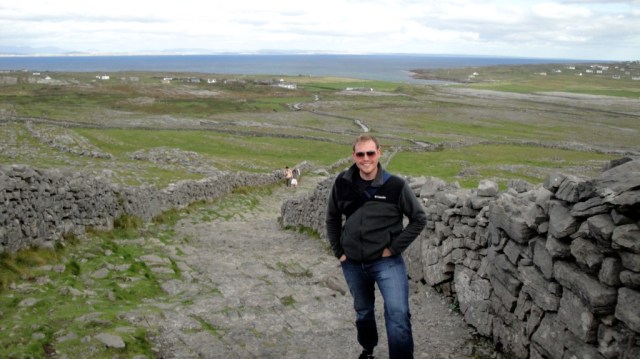 The Aran Islands, comprising Inishmore (the largest and most visited), Inishmaan, and Inisheer, have a vastly different landscape than other places in Ireland – it’s rocky, barren, desolate, but absolutely beautiful. Inishmore is reachable by a 40-minute ferry ride from Rossaveel, a port about 20 minutes west of Galway. The ferry companies run shuttles to the port from the city center. Irish is the first language out here, but everyone speaks English as well.

We rented bikes for the day (20 euros each), which allowed us to see most of the island and go at our own pace. It was a fairly strenuous bike ride. I also chose a cute bike with a basket in the front, when I should have rented a road bike. It was a bumpy ride! You can also tour the island by chartered bus or horse and buggy. You don’t need a car out here. 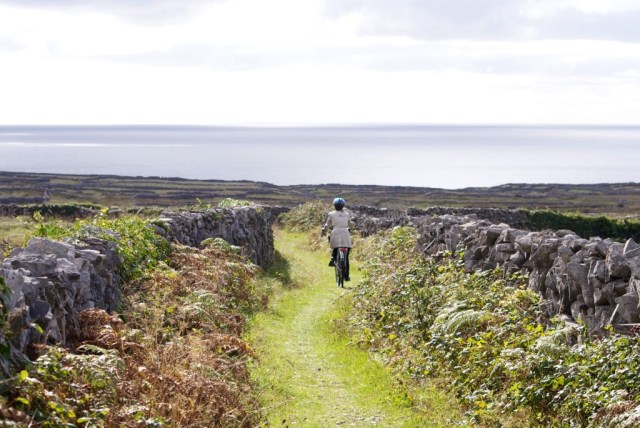 The bike rental company provided a map of the island. Maybe it was because we went at a low-tourist time, or maybe we took some back paths, but it was hard to navigate the map and see where we were. I was also anxious about missing the ferry back to the main land (there was only one at the end of the day!).

By far the highlight of the Aran Islands was Dún Aenghus, an Iron-Age fortress, which is set upon massive cliffs. There was no wall or barrier so you can walk right up to them, although most people opted to lay down and look over the edge. It was awesome and terrifying at the same time. 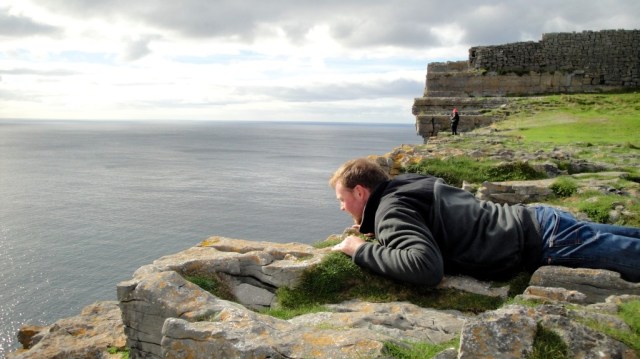 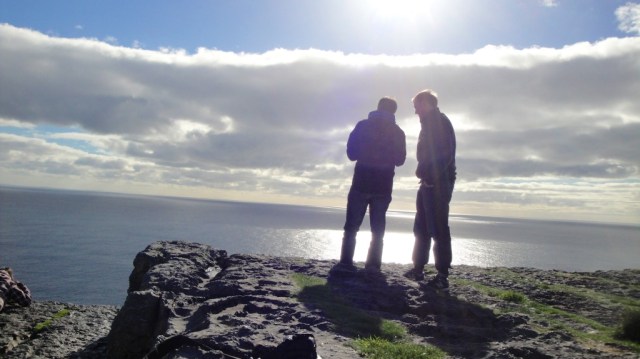 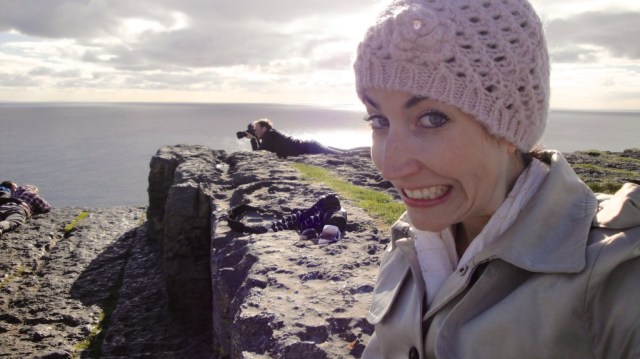 My face the whole time near the cliffs.

We left an entire day to drive back to Dublin for an early flight out the next morning. There is highway that is a straight shoot from Galway to Dublin so it’s an easy drive. I looked for a place to stop off during the drive and found Clonmacnoise (a mouthful, isn’t it?).

Situated on the River Shannon south of Athlone, Clonmacnoise is a monastery founded by Saint Ciarán in 546. The monastery became an important site for early Christianity, trade, and learning. The site was also attacked by Vikings 12 times over a 200-year period (ouch). The ruins have been preserved and you can still see ancient crosses, temples, and cathedrals. The surrounding area also has a modern cemetery and beautiful views of the river and pastures. 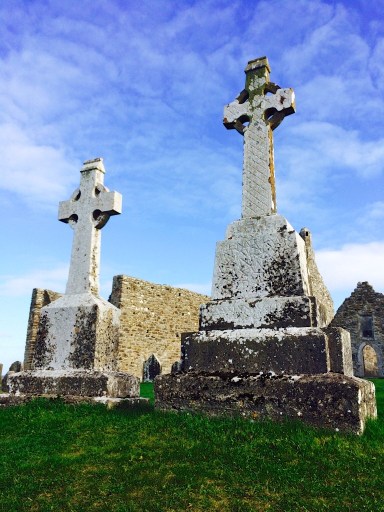 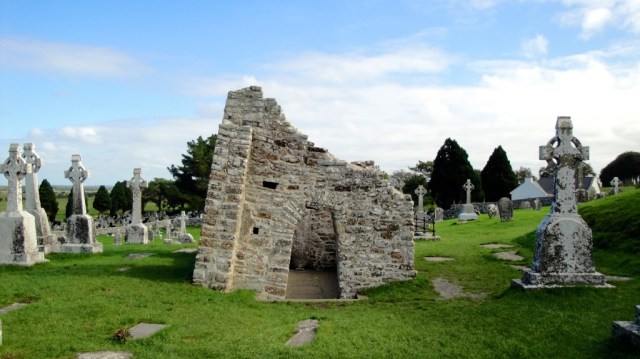 The holiest building on the site. 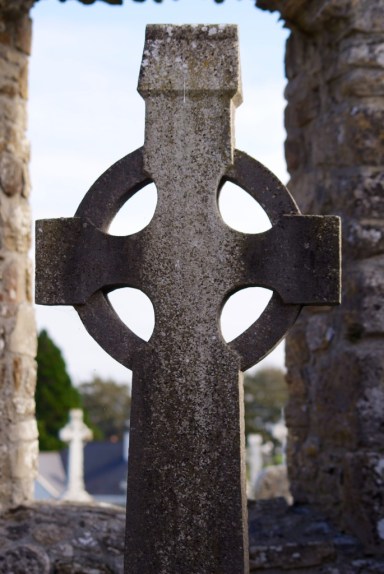 We spent our last night at the Abbeyglen Cottage in Swords, a neighborhood north of Dublin and close to the airport. Our hosts at the cottage were wonderful, and although we could have taken a bus into Dublin, we decided to spend a quiet evening around Swords. We had dinner at The Old Schoolhouse, which had excellent food and a lively ambiance. Ireland was playing in the World Cup qualifiers, so we walked to a pub in town to watch the game (and people yelling at the TV).

Thanks for bearing with me over the three-part Ireland trip! I hope I provided some helpful information along the way. If you can bear with me this long, I’ll do one more post about some practical tips for travel that I had trouble finding, including driving on the other side of the road, booking B&Bs, etc.