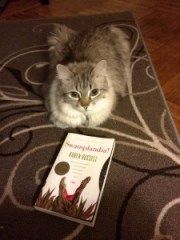 Rowdy is not sure how he feels about Swamplandia!

I think Swamplandia! is one of those books that critics loved (it was the New York Times Book Review’s Ten Best Books of the Year) but readers are not as convinced. It took me a long time to read this novel. When I was done, it took me a few more days to decide if I liked it (final verdict: didn’t like it).

I try to never do this before I write a review, but I checked out the feedback on Amazon and it’s TOTALLY SPLIT: 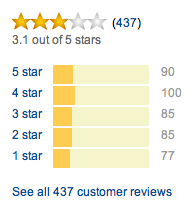 I don’t think I’ve ever seen a book with reviews that are that polarized. Swamplandia! has its merits but it also has some major shortcomings. I think the easiest thing to do is to break out a pros and cons list:

PROS
Unique Setting
The story takes place in a campy, unusual setting – the Ten Thousand Islands in the Florida Everglades – and Russell does a great job of painting this isolated, lush, wet, humid, rugged land. The Bigtrees, the primary family/characters in the novel, are fiercely proud of their island heritage and lifestyle.

Tone
The book has a fantastical, surreal, magical tone and the setting encompasses this well.

Likeable Characters
The Bigtrees, comprising big brother Kiwi, middle sister Osceola, the youngest (and our main protagonist) Ava, and their Dad, Chief Bigtree, are a likeable lot. The Bigtrees own Swamplandia!, an offbeat theme park where they perform for tourists and wrestle alligators (which they call Seths). The family has recently lost their mother, who was also the star performer of Swamplandia!, to cancer. With their star performer gone, Swamplandia! has taken a turn for the worst and the Bigtrees are in a great deal of debt. Each member of the family is coping in their own way (some more destructive than others) and chaos eventually ensues.

Descriptions of Grief and Emotion
The novel provides a touching portrait of a family’s grief and resilience. Russell writes about young Ava’s sense of loss and longing for her mother in a way that makes her grief very real and palpable.

“The Bird Man had opened all the windows in our kitchen. Rose curlicues shivered on Mom’s brown curtains, a fabric garden, and suddenly I missed my mom again with a pain that was ferocious. She was everywhere and nowhere in the kitchen.”

“Our mom, as stern and all-seeing as she could often seem, would do us this great favor of pretending to be credulous when we faked sick. Mom cooed sincerely over our theatrical moans and coughs. She would push our hair back from our cool liar’s scalps and bring us noodles and icy mainland colas as if happy for an excuse to love us like this.”

The Writing
The writing is artsy, descriptive, flowery, and fantastical.

CONS
The Writing
The writing is artsy, descriptive, flowery, and fantastical. Sometimes this works (see above) and sometimes it doesn’t. I think that other aspects of the novel, such as plot, character consistency, pace, etc. are often sacrificed for the sake of artistry.

Readability
I found this novel hard to read because of the dense, artsy writing. I almost put it down too many times to count. I found the book very engaging when the storyline was actually moving, but there was too much description, flowery prose, and literary fluff to make this an enjoyable read. I think the author is passionate and talented, but the novel needs to be more focused.

Two Narratives
The story is told in the first perspective from Ava and in third perspective through Kiwi. Both of these characters are extremely loveable, but I’m not sure why Russell chose to write the novel in this way. Kiwi’s perspective, in particular, often deviates from the main storyline and feels extraneous. I also wonder why Russell didn’t include a few chapters from Osceola’s perspective (why only do two out of the three children?), who has some interesting and unusual qualities in her own right.

The Event
Without giving too much away, a truly awful thing happens towards the end of the novel. This event is inconsistent with the characters and with the story. It is also inconsistent with the tone of the book – the fantastical realism does not lend itself to such a grim event. The event comes out of left field (the reader is totally unprepared for it) and does not advance the storyline. It seems like a cheap plot point to keep readers engaged, although it’s really not needed. The most frustrating part of this unfortunate event is that it is never dealt with. This awful thing happens and it’s never talked about, addressed, or discussed again. I don’t understand why an author would include such an event and not deal with the aftermath. It’s wrong. It’s frustrating. It made me angry.

Loose Ends
As indicated above, Russell does not do a good job of tying up some major plot points. I felt like I stuck with these characters through almost 400 pages of dense, flowery prose but a lot of their story was left unfinished. The Bigtrees were very relatable, likeable characters and I felt they deserved better.