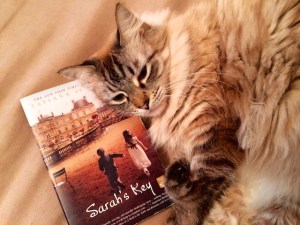 Warning: this is another book about the Holocaust. I’ve read a lot of these lately, kind of accidentally. It’s a heavy topic, but an important one. And the books I’ve reviewed lately (Fatelessness, What We Talk About When We Talk About Anne Frank) have been very enriching.

Anyway, I’ve read Sarah’s Key twice, once a few years ago and recently to review it for the blog. It’s kept its appeal as a complex, face-paced story: it’s quite a page-turner. Even the second time around, I couldn’t put it down and read it in less than a day!

The heart of the novel is Sarah Starzynski, a 10-year-old girl of Polish-Jewish origin who was born and raised in Paris. The novel opens in July of 1942 with policemen banging on the Starzynski’s door, demanding that the family pack their bags and leave their home. Sarah departs with her parents, but not before she helps her younger brother, Michel, hide in a secret cupboard in their room. She locks Michel in and takes the key with her.  She says, “I’ll come back later for you. I promise.”

Outside, it was daylight. The narrow street was empty. The girl looked back at her building, at the silent faces in the windows, at the concierge cuddling little Suzanne.

The music teacher raised his hand slowly in a gesture of farewell.

She waved at him, smiling. Everything was going to be all right. She was coming back, they were all coming back.

But the man seemed stricken.

There were tears running down his face, silent tears of helplessness and shame that she could not understand.

We learn that Sarah and her parents were part of the Vel’ d’Hiv roundup, which was a raid and mass arrest of Jews by French police, directed by Nazi authorities. From Wikipedia:

The name “Vel’ d’Hiv Roundup” is derived from the nickname of the Vélodrome d’Hiver (“Winter Velodrome”), a bicycle velodrome and stadium where most of the victims were temporarily confined. The roundup was one of several aimed at reducing the Jewish population in Occupied France. According to records of the Préfecture de Police, 13,152 victims were arrested, including more than 4,000 children. They were held at the Vélodrome d’Hiver in extremely crowded conditions, almost without water, food and sanitary facilities, as well as the Drancy, Pithiviers, and Beaune-la-Rolande internment camps, then shipped by railway transports to Auschwitz for extermination.

The book painstaking describes the horrendous conditions the victims endured in the stadium. Sarah guards the key with her life and has only one thing on her mind: going back to the family’s apartment in Paris to find her brother, locked in the cupboard. Instead, her family is shipped to separate camps. We follow Sarah through her devastating and heartbreaking journey.

Juxtaposed to this story is that of Julia Jarmond, an American journalist living in Paris. She is tasked with investigating the Vel’ d’Hiv for its 60th commemoration. A dark part of France’s history, Julia is surprised and fascinated that the roundup is not well known, or was it taught in schools. Athough directed by the Nazis, the roundup was undertaken by French police, under the French government. Of the 4,000 French children sent to the camps, almost none came back.

Julia learns that her husband’s family has a link to Sarah through one of the vacated apartments that appeared throughout Paris after the roundup. Her father-in-law has kept the link a secret, and swears Julia to secrecy. She becomes obsessed with learning about Sarah, what happened to her, and the fate of her beloved brother who was left behind in the cupboard.

The two stories flip back and forth through most of the book. Sarah’s chapters are extremely well-written with intricate detail and evident passion. I found myself skimming the rest of the book to get to her story.

Julia’s chapters, meanwhile, feel like they were written by a different author. I understand that Julia’s story is naturally not as compelling (she has a failing marriage, a young child, blah blah), but her chapters feel trite and slow. The characters in Julia’s life are terribly cliche – she has an arrogant French husband, two fabulous gay friends, a hard-ass New York boss, a sophisticated Long Island family (I could go on). It’s such a contrast to the beauty,  flow, and uniqueness of Sarah’s story that it is surprising.

Still, Sarah’s Key is worth the read, if only to discover Sarah’s story, learn about this little-known and dark event, and read the (fairly) satisfying ending as everything comes together.