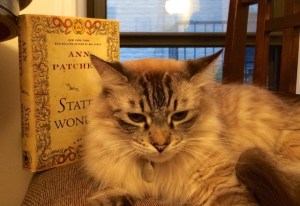 When people ask me for a book recommendation – a novel that is solid and well-written with an enjoyable and engaging story – I think of this book. It’s been a favorite of mine since it came out in 2011. I’ve read two books by Ann Patchett, State of Wonder and Bel Canto, and thoroughly enjoyed both. Patchett is a master storyteller and remarkably talented writer.Her action scenes read like a movie script yet she always captures emotional and poignant nuances between characters. Her stories showcase a clear human element while never sacrificing pace or plot.

State of Wonder focuses on Dr. Marina Singh, a pharmacologist working at Vogel, a large pharmaceutical company. While likeable enough, Marina is a kind of everywoman – bland, non-controversial, morally sound – she serves as an excellent foil to the more flamboyant personalities in the novel. Vogel is funding the work of Dr. Annick Swenson, Marina’s former mentor and a scientist of legendary proportions, who is developing a fertility drug deep in the Amazon. No one, not even Jim Fox, Vogel’s CEO and Marina’s lover, knows where Dr. Swenson’s research station is located.

The rumor is that Lakashi women, an Amazonian tribe with whom Dr. Swenson has worked for decades, can conceive and carry pregnancies well into their 60’s, 70’s, and beyond. It is the fertility holy grail. Dr. Swenson has been given a wide and lenient berth to conduct her research.

As Anders had tried to explain to her when she had been so disinclined to listen, the Lakashi were an isolated tribe in the Amazon whose women appeared to continue to give birth to healthy infants well into their seventies. Securing accuate ages on the women was of course an inaccurate science. Still, it did not undermine the point: old women were having babies. The Lakashi were reproducing for up to thirty years beyond the women in neighboring tribes. Families containing five generations were commonplace, and aside from what could perhaps be called a heightened exhaustion, they all appeared to enjoy a state of health commensurate to that of their indigenous peers.

Marina’s office mate and close friend, Dr. Anders Eckman, had been chosen by Vogel to visit Dr. Swenson in the Amazon to check on the progress of the research. A tall, pale, Minnesotan from the suburbs, Anders was a poor candidate for the Amazon. Mr. Fox and Marina receive a brief, cryptic letter from Dr. Swenson noting that Anders had contracted a fever and died. Marina and Mr. Fox, are tasked with breaking the news to Ander’s wife and three young sons. Devastated and in disbelief, Ander’s wife asks Marina to go to the Amazon to find out what happened to Anders.

What follows is a true adventure story – from Marina’s time in Manaus, Brazil, to a few months of life with the Lakashi deep in the Amazon. While there, Marina is asked to give of herself more than she ever thought possible. She reconciles a secret, tragic past, and learns how far she will go for the sake of science and finding out what happened to her friend.

She understood in life that a person was only allowed one trip down to hell.

The novel makes powerful statements about scientific research, protecting indigenous peoples, and respecting and honoring a foreign, sacred land. Patchett does a tremendous job of describing the Amazon, the foreignness of it, its dangers and secrets, and its darkness.

Never be so focused on what you’re looking for that you overlook the thing you actually find.