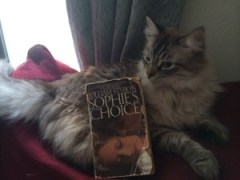 I’ve had Sophie’s Choice on my shelf for awhile – a very used 80’s style copy featuring young Meryl Streep and Kevin Kline. I have no idea when I bought it. I was recently reading The Year of Magical Thinking by Joan Didion. In one of her recollections, she talks about how her late husband, writer John Gregory Dunne, was reading Sophie’s Choice for the second time to “see how it works.” I thought, if these two great writers can learn from this book, then I can too. Sophie’s Choice won the National Book Award in 1980 and William Styron won the Pulitzer Prize in fiction for his previous novel, The Confessions of Nat Turner. And these stats mean something to me because I’m an awards whore. (Fun Fact! Styron is a co-founder of The Paris Review, which currently has an awesome Facebook page.)

Styron wrote Sophie’s Choice after 10 years of “literary silence” (not my terms). I guess those 10 years of thinking, ruminating, and creating were well spent because Sophie’s Choice reads like the masterpiece that it is. The book tackles both light-hearted matters (the lead character’s insatiable horniness) and the most difficult topics (the Holocaust) with ease and eloquence.

Set in Brooklyn (holla) in 1947, the story centers around 3 main characters:

Stingo becomes Sophie’s best friend and confidant as he helps her navigate her relationship with Nathan. She begins to talk honestly and openly with Stingo about her past. Sophie’s recollection of her time in pre-war Kraków, and later as concentration camp prisoner, are the most engrossing and poignant parts of the novel. We do not learn about her choice until nearly the end of the book (I did not watch the movie before I read the book, so I had no prior knowledge of what Sophie’s Choice was about). While it is not a complete surprise, her choice is as devastating and wretched as one can imagine. I read that in making the movie, Meryl Streep insisted on filming the choice scene only once, and in one long take, because it was so emotionally draining. I believe it.

Styron is a master at character development and he reveals specific aspects and histories of each character at the perfect time. My criticism of the book would be that it is so wordy. I found myself skimming through pages at a time and not missing any worthwhile material. Certain sections are repetitive as well. However, Sophie’s Choice is an all-around solid read that tackles the most difficult subjects with compassion and grace.