Home  »  Book Reviews • Nonfiction   »   I Feel Bad About My Neck: And Other Thoughts On Being A Woman by Nora Ephron 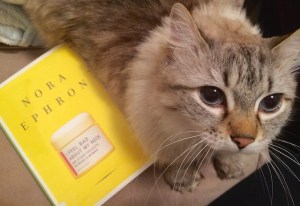 Nora Ephron is a very funny lady. I Feel Bad About My Neck: And Other Thoughts On Being A Woman is a collection of essays that profiles aging, parenting, beauty, fashion, cooking, relationships, and more. Although it is essentially a humor book about women and aging, you don’t have to be of menopausal age to enjoy and appreciate Ephron’s dry sense of humor. Nora Ephron, author, screenwriter, journalist, producer, playwright, and a bazillion other things is best know for writing the screenplays of When Harry Met Sally and You’ve Got Mail.

Let’s begin with the title story which focuses on women’s necks. Ephron waxes poetically about her neck and how she feels that it ages her. You can make a lot of small tweaks to your face, but you can’t do anything for your neck.

According to my dermatologist, the neck starts to go at forty-three and that’s that. You can put makeup on your face and concealer under your eyes and dye on your hair, you can shoot collagen and Botox and Restylane into your wrinkles and creases, but short of surgery, there’s not a damn thing you can do about a neck.

And when it comes to plastic surgery, I learned, the only way to fix the skin on your neck is to do a total face-lift. Face, neck, it’s all tied together. So excuse me while I go put sunscreen and moisturizer on my neck (and upper chest because, you know, that droops too).

The collection is chock-full of relatable topics and funny anecdotes. In “I Hate My Purse” (me too, Nora!), Ephron talks about the ridiculous lengths women go to for bags, in maintaining their bags (don’t let the bag get caught in the rain!), the inevitable disorganization of purses (it’s an inevitable repository for old tic tacs), and the silliness of the whole shebang. In “Maintenance,” she discusses the annoying, tedious, everyday routines that women have to endure to make themselves not look like “someone who no longer cares:”

Sometimes I think that not having to worry about your hair anymore is the secret upside of death.

Her chapter “Moving On,” about her love affair and break-up with her apartment building, the Anthorp on the Upper West Side, is a hilarious treat for New Yorkers. (For those who live in calmer, sane parts of the world: a large, below-market apartment in a good location is better than a boyfriend.) Her self-deprecating humor adds levity and makes her accessible to the reader. She recollects that her father said, “Well, maybe someone will marry her for her personality.” She talks about being the only intern in the JFK White House that the president didn’t want to bang.

Ephron doesn’t deal with heavy topics, rather she aligns them with a corresponding, random subject. In “Serial Monogamy: A Memoir,” she talks about the evolution of her cooking style in regards to her relationship status.

I’ve been wanting to read something by Nora Ephron since hearing of her death at the age of 71 in 2012. Her wit and humor, and personal and relatable style, makes it feel like she’s a close friend. A light, quick read (I read it in about 3 days), I Feel Bad About My Neck: And Other Thoughts On Being A Woman is perfect plane/vacation/summer/beach read. Treat yo’ self!

From the Acknowledgements section:

I would also like to thank all the people who have labored hard to stop the forces of gravity where I’m concerned. As a result I look approximately one year younger than I am. You know who you are.