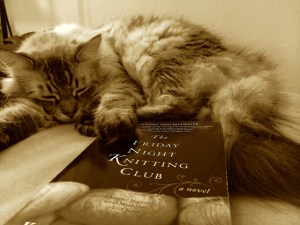 I’m admittedly not very familiar with the “chick-lit” genre, but I think The Friday Night Knitting Club falls neatly into it. I really wanted to like this novel, as the premise is innocent and sweet. It focuses on companionship between women and features a cast of independent female characters. Each character undergoes a journey of growth and self-realization. But the cast, the writing, and the story is so cliché and trite that was no way I could enjoy this novel.

The story’s central character is Georgia, a single mother to her 12-year-old daughter, Dakota. She became pregnant by her boyfriend, James, when she was in her early twenties and James subsequently bailed on her. Through a loan from Anita, a kind and wealthy widow that she met on a park bench (note: this never happens), she opens Walker and Daughter, a niche knitting shop on the Upper West Side of Manhattan.

The shop eventually becomes a gathering place for a small group of women. They meet each Friday night to knit, talk about their problems, and play truth or dare (yes – grown women playing truth or dare). One day, Georgia’s childhood, backstabbing best friend Cat shows up at the store to commission a dress. And at just the same time, James waltzes back into their lives to try to form a relationship with Dakota and Georgia.

If the story is tedious and vapid, the characters are worse, consisting of horrible, clichéd stereotypes. Georgia, the strong single mom. Anita, the wise older woman. Darwin, the angry and off-putting women’s studies student. Cat, an unhappy socialite trapped in a miserable marriage. Lucy, the 40-something independent filmmaker yearning for a baby. Peri, the young fashionable purse designer. It is like someone took a teenager’s amateurish view of the lives of adult women in New York City and wrote a book about it. To illustrate the point, here are some snippets of descriptions and dialogue:

Georgia sighed. Hello, you, she said to the mirror. We’ll get through it all and we’ll look damn smashing…Did she even own a push-up bra?

In the beginning she rarely smiled; she just furiously scribbled and later moved on to interviewing the members of the club about their “obsession with knitting.”

“How do you feel knitting connects with your conceptions of femininity?”… “Does being an older knitter make you feel disconnected from the younger trendsetters?”

Oh, she could fit in an exercise class. Review her social diary. The fundraisers. The dinners. The lunches. Go shopping. Plan yet another party.

“Oh Peri, you’ve got it all wrong. Georgia is filled with exactly the same kinds of conflicting emotions and securities we all are…The thing is, she loves herself in spite of it all.”

“You are finally your own woman.”

As you can see from the above, the writing is very poor. It’s informal to the point of being irritating. Further, no one above the age of 15 thinks or acts like these characters:

When she was with James, she splurged on taxis she couldn’t afford and pricey designer shoes (but quality lasts – she still had those cowboy boots and wore them damn often, thank you very much).

There are lessons to be learned in the story, but the reader is smacked over the head with them. There are no gentle implications and rich, intricate story lines. Instead we are told, told, told exactly what is going on, with no room for interpretation. We are not shown Cat’s unhappy marriage, rather we are told that her husband is a rich dirtbag who married her to get back at this parents.

One last annoying detail is that the chapters are punctuated by pages of knitting wisdom. These bits get less relevant to knitting and more blatantly symbolic the further along we get in the book:

All you have to do is forgive.

What does this have to do with knitting?

I understand that The Friday Night Knitting Club is chick-lit. There’s nothing wrong with chick-lit – I love books with strong female characters and energetic story lines. But we can definitely do better than this.