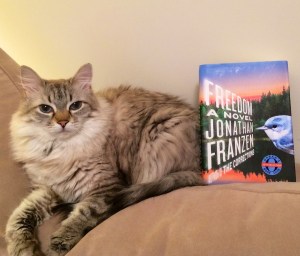 Rowdy is a bit depressed after reading Freedom.

When Freedom came out in 2010, Jonathan Frazen appeared on the cover of Time magazine with the headline “The Great American Novelist.” (Subhead: “He’s not the richest or most famous. His characters don’t solve mysteries, have magical powers, or live in the future. But in his new novel, Freedom, Jonathan Franzen shows us the way we live now.”) Along with his late friend, David Foster Wallace, and a handful of others, he has been declared one of the best contemporary writers. He’s relatively young, outspoken, a gritty and aggressive writer, and he’s  grumpy. Critics fell all over themselves praising his previous novel, The Corrections (2001). So when Freedom, his fourth novel, arrived in bookstores people took notice, including Oprah. This novel, and its sullen look at social realism, was everywhere.

I just finished my second reading of Freedom and I feel like I could read it a third or fourth time. Not because I found it particularly indulgent or even that enjoyable, but because it is complex and illuminating. It’s one of those books where the reader can find something new – an intricate detail, a well-placed plot device, a fresh idea, that they had missed the first time around. That being said, the novel is pretty depressing.

Freedom focuses on the Berglund family – parents Patty and Walter, their son, Joey, and to a lesser extent, their daughter, Jessica, as well as Walter’s best friend, Richard Katz. The novel is told through the perspective of Walter, Richard, Joey and most interestingly – Patty, through an autobiographical manuscript she writes as part of a therapy project. The book opens with the Berglund’s idyllic life in St. Paul – the old house they bought for cheap and renovated with elbow grease alone, their gentrified block, their perfect family dynamic, and how they are the envy of the neighborhood. Patty, a talented former athlete, is the ideal stay-at-home mom . She bakes cookies, is friendly with every neighbor, and doesn’t have a bad word to say about anyone. Walter, a hardworking, intelligent, and conscientious environmental lawyer, as well as an exceedingly nice person, bikes to work everyday and is completely in love with his wife. Richard Katz is kept at a distance and admires Patty and Walter for their easy, content domestic life. This is a Jonathan Franzen novel, however, and their happy existence doesn’t last long.

Joey and Jessica grow older and are less in need of Patty. At the age of 16, Joey, Patty’s favorite and confidante, defies his parents and moves in with his girlfriend next door and her low-class, Republican family. Walter throws himself into his work and eventually accepts a position in Washington, where things really go south. Patty finds herself unraveling and feeling more useless everyday. Richard, Walter’s best friend, comes into the picture and proves to be both a destructive and illuminating force in the Berglund’s marriage. These events change each of the characters and bring out the worst in their nature.

Jonathan Franzen doesn’t write likeable characters. He just doesn’t. I found this to be similarly true for The Corrections. There isn’t a single character in either book that I would want to sit down and have a beer with. Or, even be in the same room with. However, Franzen  explores his characters like no other. We are given a thorough look at their families, their pasts, their previous experiences, and how these things have shaped their personalities. Even though the characters say and do ugly things, we, as readers, understand what makes them act the way they do. All of the main characters are complex and completely multi-dimensional. Further, Franzen doesn’t shy away from portraying the worst of human nature: the dark, sinister thoughts that aren’t meant for anyone to hear and the intricate, uncomfortable details about our needs and desires. He also probes into the  jealousies and insecurities that affect our relationships and lays these bare for the characters to wrestle with. But it isn’t all gloom and doom. Franzen also portrays some of the best things about what makes us human – those happy moments of friendship, marriage, sex, achievement, and the like.

I was more sympathetic to the characters the second time around. We have a tendency to remember bad things over the good. The first time I read the book, I was a bit repulsed by  all of the main characters, which is a crazy feat for a novel. However, the second time through, I paid more attention to the back stories and experiences, in particular, Patty’s, and found that I had a greater understanding of Franzen’s characters.

One last note – I was confused at first by how the novel related to the title. Franzen is an intellectual and thoughtful writer, and he trusts his readers. He doesn’t hit us over the head with connections and symbolisms, but lets the reader figure it out on their own. I was discussing the novel with a coworker who mentioned that he got the connection right away. Each of the characters have something they want to break free of, something that is inhibiting what they desperately want. Patty yearns for sexual freedom but is held back by a traumatic past event and lack of family support while growing up. She’s also trapped by her marriage to nice, amenable Walter.  Walter, with his astute sense of responsibility made him put his ideals of the environment and overpopulation on the back burner. Joey is intelligent, charismatic, alarmingly self-sufficient, and  lacking just enough morals to make him great at business, but is restricted by family burdens and an overly attached girlfriend. Each of the characters spend the novel escaping from something.