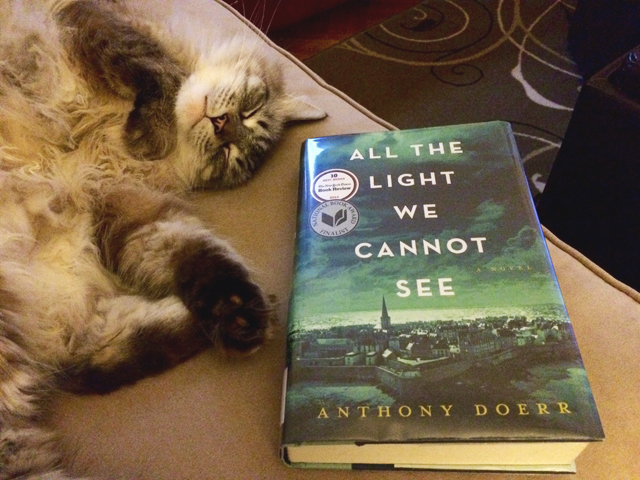 Cruising through my best books list of 2014 (I’ve done 3/5 so far…not bad), this novel has become quite popular in recent months. I’ve read a number of books this year set during the World War II era – Fatelessness, Sarah’s Key, and The Book Thief, to name a few – and I felt that each offered a vastly different perspective of the war – a Holocaust survivor, German citizens hiding a Jew, the occupation in France. This era is often romanticized, but it is also intensely fascinating and crucial to our understanding of history. Further, those who lived through or fought in this war are now elderly and won’t be around for much longer to share their memories.

However, while I understand that it’s important to document these events (even in a historical fiction), I’d also like to learn more about other periods in recent history. World War I for example had an enormous number of casualties and represented a pivotal era in world history (and my family’s history as well), but there aren’t that many references to it in popular culture – books, movies, museums, etc. Not to mention that there have been other genocides this century that haven’t received nearly enough exposure  – Bosnia-Herzegovina, Rowanda, Sudan, and Albania, to name a few.

Any suggestions for historical fiction or non-fiction that deals with another important era or event?

Moving on from my tangent, All the Light We Cannot See features the parallel stories of Marie-Laure, a blind girl living in Paris until the occupation, when she moves to her great uncle’s house on the coast, and Werner, a German orphan with a talent for fixing radios who is eventually drafted into the war. Let me reiterate these main characters: they are a blind girl and an orphan. How much more sympathetic can you get? These two have been dealt a hard hand even before the war begun, and naturally they suffer terrible tragedies and great loss throughout the book. We fall in love with them easily, and continue to wholeheartedly root for them.

The book starts with charming and original details of the characters’ lives. Marie-Laure’s beloved father is the chief locksmith at the Museum of Natural History in Paris. He loves her wholly and completely, and builds a perfect miniature model of their neighborhood so she can navigate on her own. There’s also a story of an enormous diamond with a wretched cursed history, and a theme of 20,000 Leagues Under the Sea that repeats throughout the novel.

Werner, a genuine, kind, good-natured boy, is growing up in poverty in an orphanage run by a nun, Frau Elena. He loves his sister, Jutta, and dreads turning 15, when he will be forced to work in the dangerous mine in town. Werner finds a broken radio and teaches himself how to fix it. He and his sister become fascinated by the programs they hear on the primitive radio, in particular, an elegant and eclectic Frenchman, by whom they become captivated.

These details are both alluring and engaging, and we are quickly drawn into their stories. However, I think this is an example of the romanticizing of that era – Werner and Marie-Laure are just so good and pure in every way, combined with their initial hardships, they could almost be Disney characters.

The novel is divided into very short chapters and flips between Werner and Marie-Laure exactly (Marie-Laure – Werner – Marie-Laure – Werner), until their stories eventually intertwine in the end. Although this gives each character equal play, I thought some storylines were drawn out and became a bit slow in order to fit with the perfect parallel structure of the book. The writing was also dense with a lot of description. The author paints beautiful metaphors and stunning depictions of life in occupied France, however, this bogged down the story at times, especially towards the end.

In conclusion, All the Light We Cannot See is a beautifully told, if romanticized, story of a difficult and devastating era, seen from the eyes of two authentic and sympathetic characters. The book has many layers and the plot is both fascinating and tragic. While there are some drawbacks, I think the book excels in presenting two fictional examples of the many, many individual stories that defined the era.