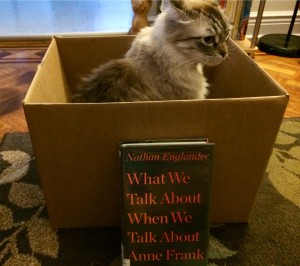 We’ve had a bunch of deliveries lately (Christmas presents), so there’s been plenty of cat traps…er, boxes lying around.

I feel a bit conflicted about this book of short stories. The collection comprises eight stories, two of which were very strong. The others, not so much. I’m going to be purposefully wishy-washy in this review because that’s how I felt about this collection.

The title story is inspired by Raymond Carver’s short story by a similar name, What We Talk About When We Talk About Love. Props to Englander for paying homage to Carver in the very first paragraph:

They’re in our house maybe ten minutes and already Mark’s lecturing us on the Israeli occupation. Mark and Lauren live in Jerusalem, and people from there think it gives them the right.

Told almost entirely in dialogue, Englander’s story portrays two middle-aged couples reunited in the Florida kitchen of the first couple (the husband of which is our protagonist). The wives were childhood friends. The four characters are boozing and smoking pot, the wives remembering their old high school days and the husbands lightly sparing over raising children, culture, and their shared Jewish faith. As the evening wears on and the characters become more inebriated, the talk becomes honest and coarse, and the four start discussing more serious and melancholic subjects, including the Holocaust. The conversation takes a turn when one of the wives reveals a morbid game she plays, which she then admits is not a game but “it’s just what we talk about when we talk about Anne Frank.”

I get what the author is trying to do here, but I just don’t think the story gets there. There is no emotional impact. There is no clear ending or resolution. You finish the story and think, huh? What was the point of reading that? What does it mean? Then again, readers are often left feeling that way after finishing some of Carver’s stories as well. WHAT DOES IT MEAN?

I felt that way about most of the stories in the collection – why read this? What is the point? I don’t think that all literature has to have some profound meaning, but it does need to feel like it was worthwhile.

Many of the stories had an unusual or intriguing concept. In The Reader, a once-popular author finds himself at book readings where only one old man is in attendance. He forges on for the sake of his one reader. In Camp Sundown, an elderly couple is convinced that another camper was a Nazi camp guard and they take justice into their own hands.

My two favorite stories in the collection were Sister Hills, about a settlement in Israel built on the eve of the Yom Kippur War and Free Fruit for Young Widows, the story of a philosopher’s dark past told through the perspective of his friend’s child.

In conclusion, I felt like most of the stories had an interesting premise but lacked impact. Some were worth it, others I could take it or leave it.