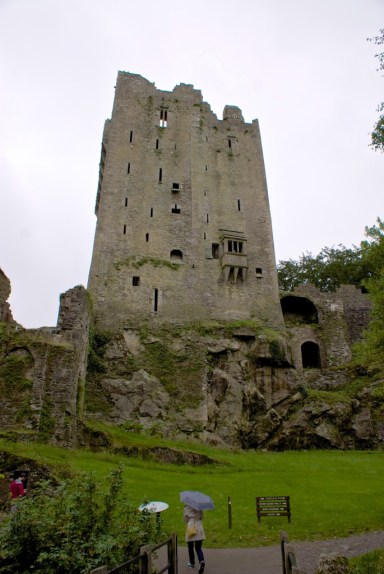 We drove into Blarney, which is just outside of Cork in the southeast area of the country, around 4pm. Our hosts at Lanesville B&B informed us that the castle closed at sunset and late afternoon was a good time to go to beat the lines. Sweet! After a full day of driving, we decided to walk down to the castle.

While researching the trip online, many people said to skip Blarney Castle. They said the castle is completely dilapidated. They said kissing the stone is ridiculous and silly (and gross). They said that there are far, far better attractions to see throughout Ireland. All of these things are true.

I wanted to do it anyway. Just once. And it was worth it. 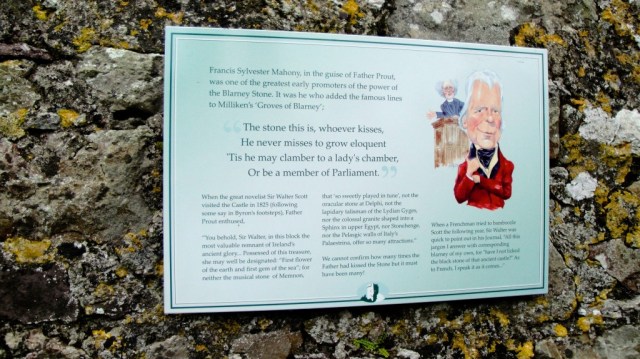 After such dismal reviews of the place, Blarney Castle exceeded my expectations. It is a legit castle and has beautiful views and gardens. The castle itself is totally run-down but tromping through all of the dark, dank stone rooms is part of the fun. The site also embraces its goofy tradition with signs and activities throughout the castle. The castle has a gate on the floor above the doorway so past inhabitants could pour boiling water onto unwanted visitors. It also has a creepy, low, dark dungeon that you can tour. Medieval times were rough. 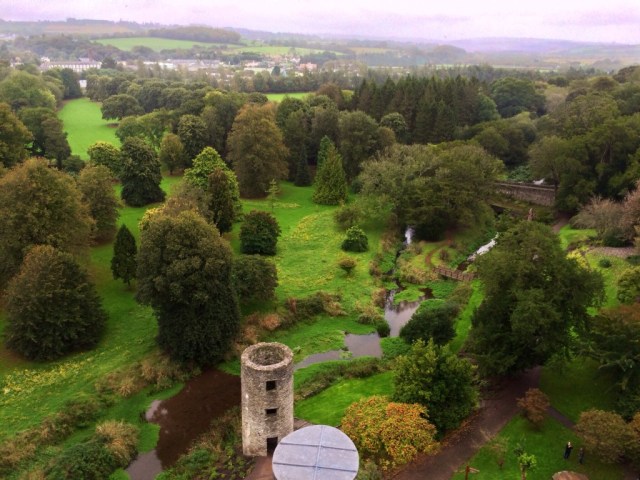 View from the castle.

A quick word of caution about the castle: you must have a moderate level of fitness to be able to go through it. There are tiny, steep staircases and the stone is exposed to the elements, making most of the castle dirty, cold, and wet.

Kissing the stone is a bit of a harrowing experience. The stone is located down and under the top floor of the castle. You grab on to two poles and lean backwards. There are two metal bars below your head that may or may not stop you from falling. The stone is at the top of the castle, about 90 feet up. A grumpy old guy holds you while an equally grumpy kid takes your official picture, which is 10 euros at the kiosk on the way out of the castle. 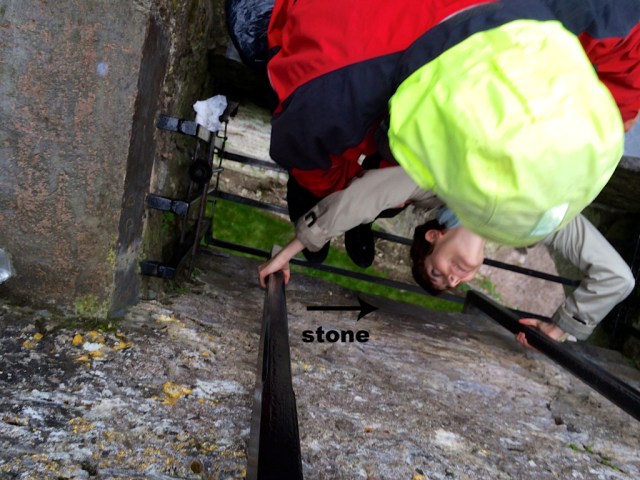 After a restful night at the B&B, we set off towards Dingle. I loved the drive from Cork to Dingle, which consisted of small, rustic roads with views of green rolling hills and farmland – exactly what you think of when you picture Ireland. 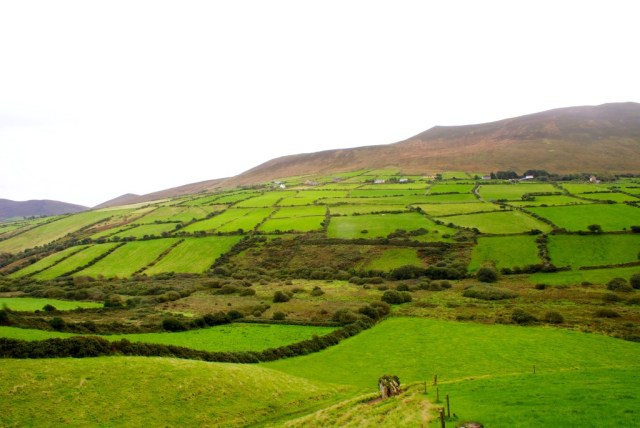 I was worried that the next part of our itinerary was too aggressive – we went from Dublin to Cork to Dingle to Galway in just three days. But it ended up being fine. I think that going slightly off-season made a difference. There was barely any traffic and the tourist sites were not crowded.

The Ring of Dingle is a 30 mile loop (called Slea Head Drive) around the Dingle peninsula. The peninsula should be driven clockwise since the roads are very narrow, loopy, and next to cliffs. Rick Steves has a great self-guided tour of the peninsula, kilometer by kilometer, here. There are B&Bs located around the peninsula but the land is very isolated and rugged. Most people stay in the town of Dingle (which is super cute). All of the signs are in Irish, with Dingle’s official name being An Daingean.

We had some lovely Irish weather on the day we were in Dingle – cold, extremely windy, very wet (our only day of bad weather!), so I didn’t get too many pictures. However, that didn’t stop us from fully enjoying the experience because the peninsula. is. stunning. Intense green hills, drastic cliffs dropping off into the Atlantic, rugged mountains, sheep, cottages, historic sites – the peninsula has so much to offer. 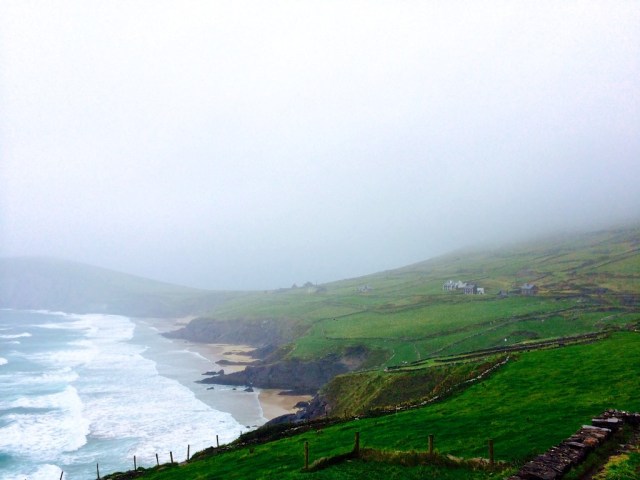 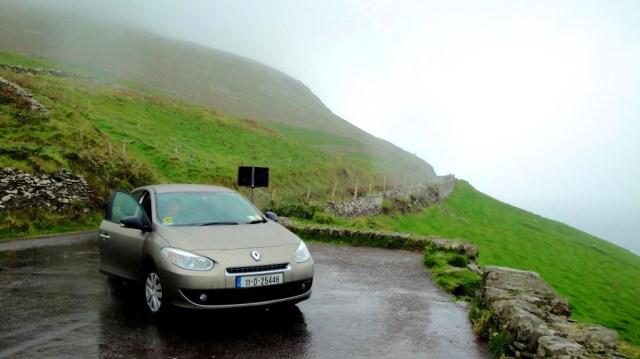 There are numerous attractions along the drive including:

The loop can be done in half a day (which is what we did), but the best way to savor this beautiful place is to devote a whole day to the drive. There are a bunch of little roads and passageways off the main drive to explore.

We checked into the Dunlavin House (looooved it there) in late afternoon then headed to town for a bite to eat at The Dingle Pub. I  read on TripAdvisor that one of the top things to do in Dingle (besides the drive, of course) was to go to the folk concerts at St. James Church. Concerts are held on Mondays, Wednesdays, and Fridays during the high season at 7:30pm. 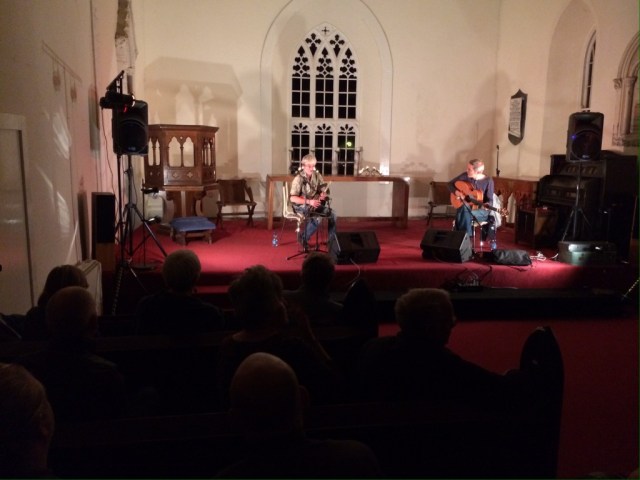 The concert was SUCH A TREAT. The church is a small venue, which makes the performances intimate and comfortable. We bought our tickets earlier in the day (many of the shops around town sell the tickets), as most performances sell out. The very talented musicians played a variety of traditional Irish music. The show is organized and hosted by an uilleann piper and composer who is passionate and informative. He started the show by telling us that he went to Dingle for a long weekend back in the 70’s, and 30 years later, what a weekend it’s been! This encompassed Dingle for me – it really is a magical place.

After a delicious full Irish breakfast at the Dunlavin House, we drove up the west coast towards Galway, with a stop at the Cliffs of Moher. We drove through Tralee, which looked very cute and busy, and Limerick. If you have the time and/or the budget (we didn’t), you can stop at Dromoland Castle for lunch or dinner for a 5-star meal in a legit castle.

The Cliffs of Mordor, oops I mean Moher, are located about an hour and a half south of Galway on the west coast. Seven hundred feet above the Atlantic and stretching for five miles, the cliffs are incredible. On a clear day, you can see the Aran Islands to the west, the Dingle Peninsula to the south, and the Maum Turk mountains in the north. 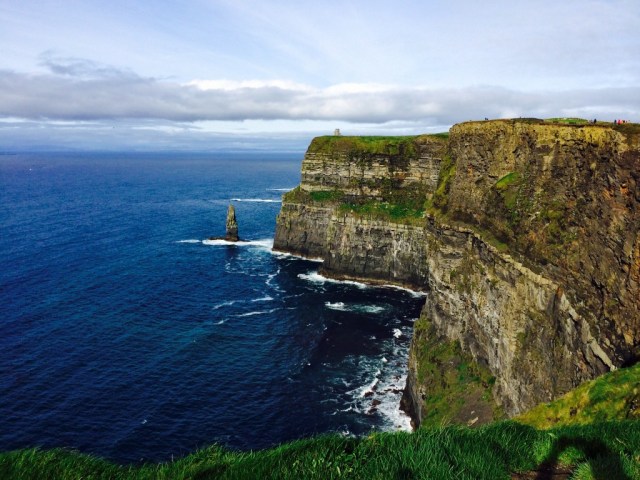 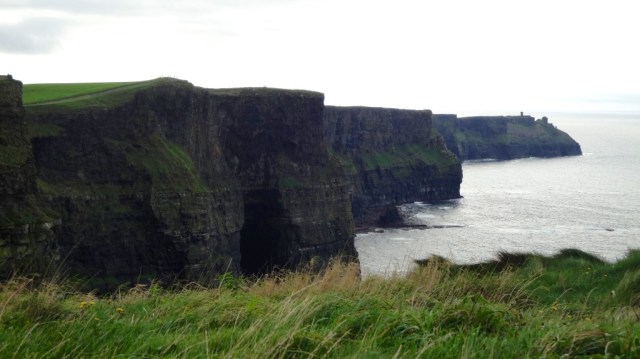 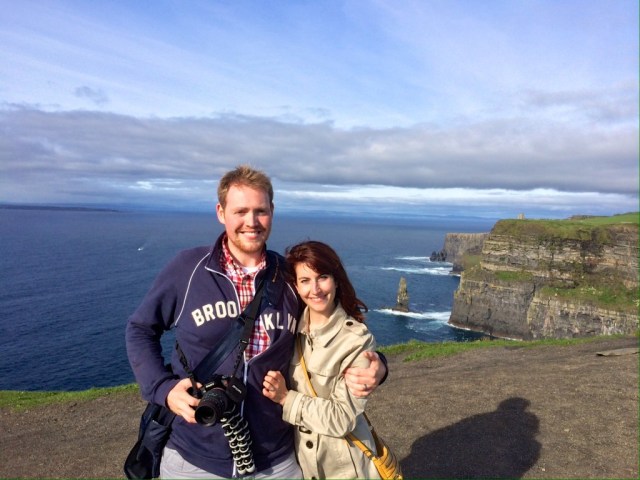 A stone tower stands near the highest point and serves as a great backdrop for some pictures and can be a reference point when remembering just how big these cliffs are. 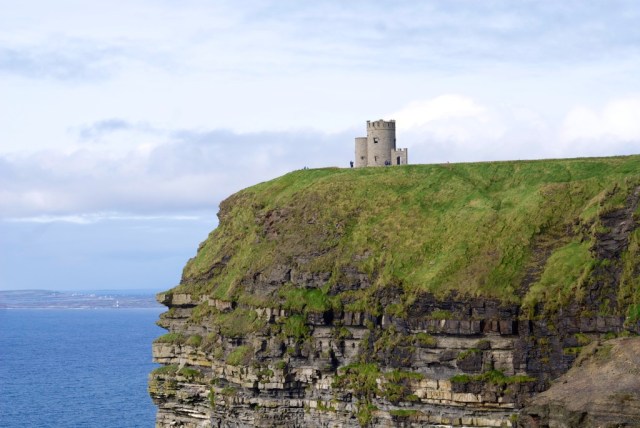 The parking lot is across the street and most of the area around the main site is protected by stone walls. There are easily accessible paths on either side of the main area where there is no wall and you can go to the edge of the cliff. We spent about 2-3 hours at the cliffs, which I thought was plenty of time to explore. There is also a new 20km coastal walk that starts in the Liscannor or Doolin villages and goes along the cliffs (for experienced hikers only!).

This marks the last of our whirlwind three days of travel around the countryside. Tune in for the final part of our trip in Galway, the Aran Islands, and back to Dublin. 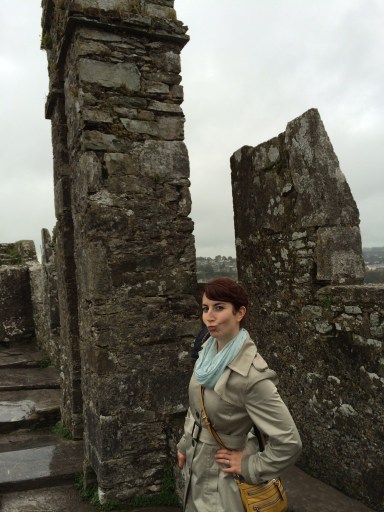 One last kiss for the Blarney Stone. 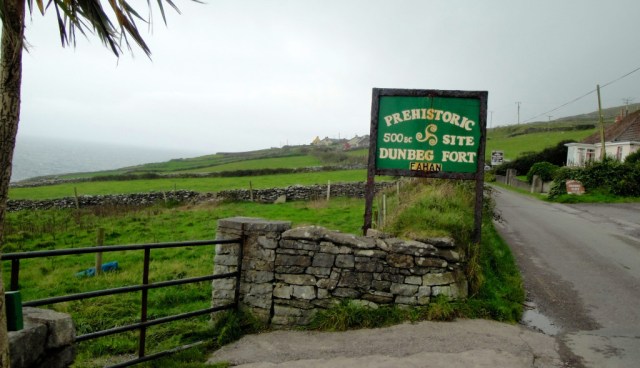 This place is old. 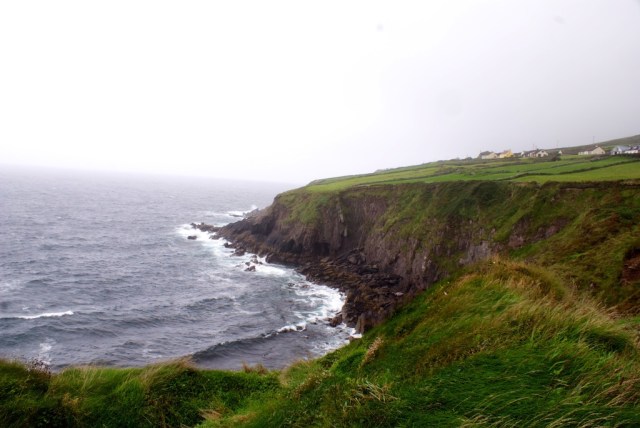 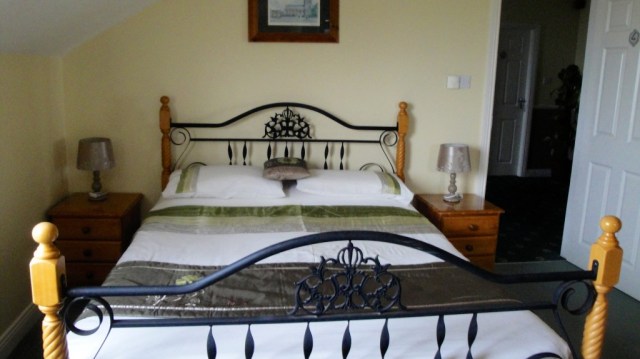 Our cozy room at the Dunlavin House. 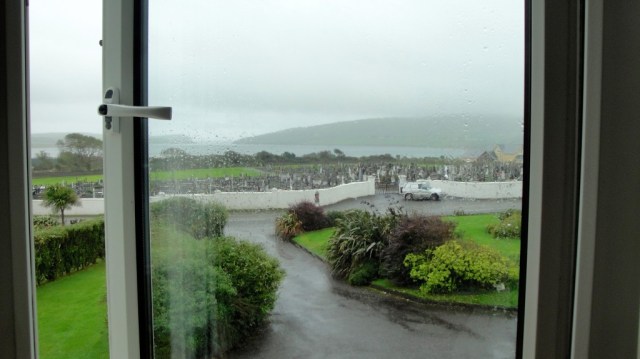 View from our room at the Dunlavin House. 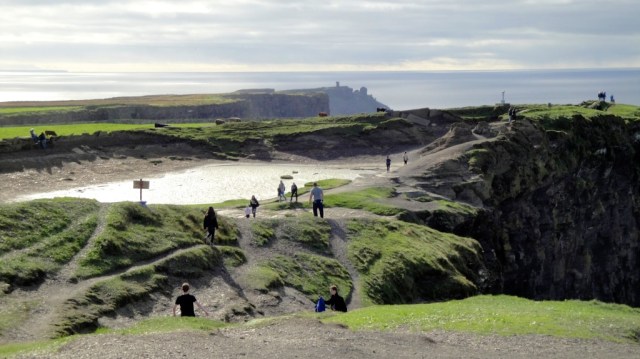 Landscape near the Cliffs of Moher. 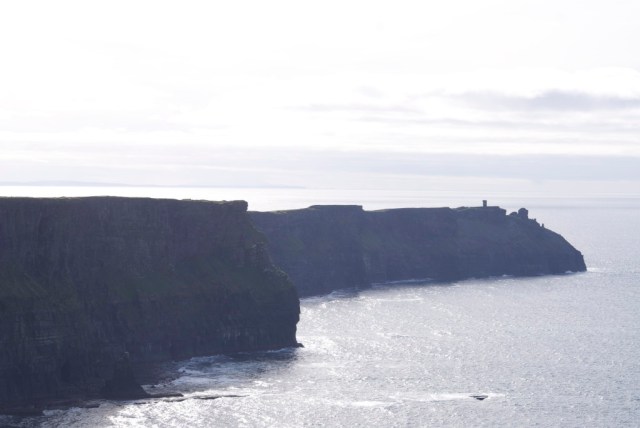 One last view of the cliffs.