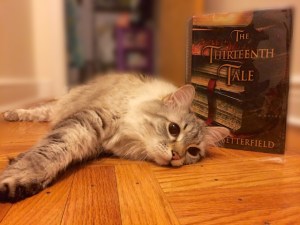 This is a novel that celebrates books and storytelling. Love books? Love a good story? Come on in.

A is for Austen, B is for Bronte, C is for Charles, and D is for Dickens. I learned my alphabet in this shop….I read gory tales of historic heroism that nineteenth-century parents thought were suitable for children, and gothic ghost stories that were surely not; I read accounts of arduous travel through treacherous lands undertaken by spinsters in crinolines, and I read handbooks on decorum and etiquette intended for young ladies of good family; I read books with pictures and books without; books in English, books in French, books in languages I didn’t understand, where I could make up stories in my head on the basis of a handful of guessed-at words. Books. Books. And books.

Margaret Lea is a true bibliophile. She works in her father’s bookshop and lives a quiet life. Actually, she is probably  the most nonchalant woman you’ll ever read about. Luckily, the novel doesn’t spend too much time focusing on her.

The only thing interesting about Margaret is that she harbors a dark, tragic secret about her past that has haunted (literally – there’s a ghost) her throughout her life.

Margaret is contacted by Vida Winter, a very famous author (think – Stephen King, JK Rowling) whose past has remained an enigma. Ms. Winter has given numerous interviews about her life, each one as inexplicable, fantastical, and ultimately untrue as the last. She is the ultimate storyteller.

For every new book that came out, she summoned a number of journalists to a hotel in Harrowgate, where she met them one by one and gave them, separately, what she termed her life story…

After the publication of Betwixt and Between, she was the secret daughter of a priest and schoolmistress; a year later in the same paper she got publicity for Hauntings by telling how she was the runaway child of a Parisian courtesan. For The Puppet Show, she was, in various newspapers, an orphan raised in a Swiss convent, a street child from the backstreets of the East End and the stifled only girl in a family of ten boisterous boys.

Then Ms. Winter falls gravely ill and insists that her real story be told. She chooses the reclusive and thoughtful Margaret as her biographer. We also learn that her secrets and Margaret’s dark past have a similar vein (of course they do).

Anyway, the boy from the Banbury Herald …said “Miss Winter, tell me the truth.” Now what kind of appeal is that?…I considered his request. I turned it over in my mind. Weighed up the likely consequences. He disturbed me this boy, with his pale face and his burning eyes.

I didn’t tell him the truth. How could I? I told him a story. An impoverished, malnourished little thing. No sparkle, no sequins, just a few dull and faded patches, roughly tacked together with the edges left frayed. The kind of story that looks like real life…

The boy has been on my mind lately. Tell me the truth. And lately I have felt that strange inner stirring.

Ms. Winter’s story will surely not disappoint. Luxuriously, guiltily gothic and suspenseful, we learn of an irresponsible and reckless family with great riches, a massive estate that becomes a character of its own, a loyal gardener and housekeeper, two wild little girls, an illegitimate child, and a devastating fire that changes everything. The fabled, mysterious, and unpublished thirteen tale is one of Ms. Winter’s best stories yet, and Margaret is the only one who can tell it. In the process, Margaret comes to terms with her own broken family and the secret that has rocked her entire life.

A bit soap opera-y, sometimes a little corny, but entertaining the whole way through.