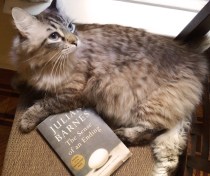 Funny story about my acquisition of this book. I was at the Hobart Book Village snooping around the shops and I kept seeing this book. Because I couldn’t go home with five bookstores worth of merchandise (and I was going a little wild that day), I didn’t end up buying this novel. In the months since, I heard about it and saw it everywhere, and regretted not picking it up when I had the chance. UNTIL I was walking in my neighborhood one day, on the way home from the gym, and someone had put out a carton of books onto the sidewalk. And, what happened to be in this carton? The Sense of an Ending, of course. It would have been great if there was chocolate in there as well, but you know, I can only dream. So I acquired this copy fo’ free.

Winner of the Man Booker Prize, The Sense of an Ending tells the story of Tony Webster. We first meet Tony when he is an adolescent in school and surrounded by his mates. They have the usual cares of teenage boys: sex, school, sex, friendship, sex, making a life for oneself, and sex. In college he (finally!) finds a girlfriend, Veronica. The relationship is brief but intense and includes a confusing yet eye-opening weekend at her parent’s house in Kent. Veronica is not very likeable, but we understand the allure, the longing, and the desperation of a sex-crazed adolescent in the throes of a new relationship.

We next meet Tony 40 years later; he is retired and divorced with one adult child. Life has been relatively kind to Tony and he has been mostly passive through it. He matter-of-factly tells us that he didn’t go out and seek things with great ambition, rather, he let life happen to him, hoping it wouldn’t bother him too much. He has a cordial, if not friendly relationship with his ex-wife, an equally cordial relationship with his daughter, a secure retirement from a long and non-varied career, not many friends, a yearly holiday abroad, and a general complacency about his past and his place in the world.

That is, until a diary, which had belonged to a family member of Veronica’s family (whom he only met briefly that weekend in Kent), was bequeathed to him in a will. The existence of the diary and Veronica’s refusal to part with it joggles his sense of his past, his conduct, and his understanding of his role in these relationships that ended long ago.

“In my terms, I settled for the realities of life, and submitted to its necessities: if this, then that, and so the years passed…In Adrian’s terms, I gave up on life, gave up on examining it, took it as it came. And so, for the first time, I began to feel a general remorse – a feeling somewhere between self-pity and self-hatred – about my whole life. All of it. I had lost the friends of my youth. I had lost the love of my wife. I had abandoned the amibitions I had entertained. I had wanted life not to bother me too much, and had succeeded – and how pitiful that was.”

As he tries to reconcile his past, Tony does much prothlesizing over time, age, and memory. While it gets to be a bit much after awhile, there does seem to be a lot of truth to these passages:

“Does a character develop over time? In novels, of course it does: otherwise there wouldn’t be much of a story. But in life? I sometimes wonder. Our attitudes  and opinions change, we develop new habits and eccentricities; but that’s something different, more like decoration. Perhaps character resembles intelligence, except that character peaks a little later: between twenty and thirty, say. And after that, we’re just stuck with what we’ve got. We’re on our own. If so, that would explain a lot of lives, wouldn’t it? And also – if this isn’t too grand a word – our tragedy.”

“But time…how time first grounds us and then confounds us. We thought we were being mature when we were only being safe. We imagined we were being responsible but were only being cowardly. What we call realism turned out to be a way of avoiding things rather than facing them. Time…give us enough time and our best-supported decisions will seem wobbly, our certainties whimsical.”

The Sense of an Ending surprised me. The story contained enough twists to be enjoyable and keep you guessing, and Tony, while not an overtly affable character, is likeable enough, and it is interesting to watch him go through this self-awakening. The book is remarkably well-written and filled with bits of wisdom (the author is about the same age as Tony). Certainly a worthwhile read.