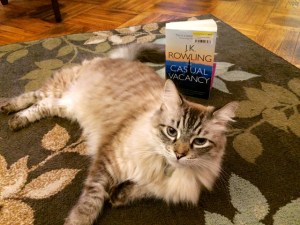 A swift departure from those little, obscure books, The Parry Hotter series, The Casual Vacancy is very much a novel for grown-ups. While describing the book to my family, I used the word ‘adult’ so many times that they thought I was reading erotica. But that’s simply the way to describe it. It’s realistic, cold, unsettling, and quite depressing.

Set in the fictional, sleepy suburban town of Pagford, England, a seat suddenly opens up on the town council when beloved family and community man, Barry Fairbrother, drops dead of a brain aneurysm. In this small and tight-knit town, the unexpected death of a young, prominent man affects a large number of people, young and old. In addition, the council was just about to vote on whether a poor, needy area of the town, “The Fields,” and its struggling methadone clinic, should remain part of Pagford or should be incorporated into the nearby larger, wealthier city of Yarvil. Conflict ensues as the council (and many members of the town) weigh in on how to handle the vacancy and the vote.

A wrench is thrown into the equation when the parish council website gets hacked (this is big news in Pagford, y’all) and dirty, nasty town gossip is uploaded onto the site. That, and the general incompetence of Shirley, the site’s administrator and distasteful wife of the council leader, leads to fear and chaos.

The chaos trickles down to a variety of characters within the town. Rowling shines here, as she often does in crafting complex, deeply thought-out characters. There are nearly 20 characters Rowling profiles throughout the novel but she plays out their stories well. I wasn’t confused by the characters or the plot and even though a cast this size can get unwieldy, Rowling interconnects their stories and relationships well, like an expert puppeteer.

Perhaps the most memorable character of the bunch is 16-year-old Krystal Weedon. Living in a filthy house in The Fields and raised by a drug-addicted mother, Krystal is the only functioning member of her household. Although she often serves as the main caretaker to her 3-year-old brother, Robbie, she is a typical “bad kid” – in trouble in school, frequently mouthing off to authority, requiring a plethora of guidance counselor sessions and social services visits. However, Barry Fairbrother took a liking to her before his death, and coached her on the rowing team where she excelled. He was her constant defender, and served as a voice and advocate for many in The Fields.

Local politics and small-town relationships aside, The Casual Vacancy takes an in-depth and thoughtful look into the complex issues of poverty, abuse, and struggle, more so than I’ve ever seen in a fiction book. Viewing The Fields from a variety of characters, including those who live in it, those who fight for it, and those who look down on its inhabitants, Rowling covers some pretty heavy topics from a variety of angles (although she is certainly more sympathetic to the struggles of those in The Fields).

Rowling also grapples with societal issues that we all face, including: Who gets benefits? Who deserves them? Are the recipients lazy, careless moochers, or do they have genuine struggles that lead them to a place of needing help? And when they do need help, whose responsibility is it to help them? And if someone is simply a lost cause, is it morally acceptable to call it quits?

The book can be hard to get into and at times it’s hard to stay with for the simple reason that local politics are really not that interesting. I understand that in this book, the local political wars lay the foundation for the story. But there are some awfully long passages about the town council, and town positions, and budgets, and zzzzzzzz yeah, I fell asleep.

In conclusion, The Casual Vacancy isn’t a fun book to read and the story isn’t pleasant. I know that critics panned this when it came out, but I think it takes an earnest look at some important issues. The characters are bold and realistic, their struggles are real, and I think the novel is an ambitious feat.