A little something about me: last fall, I applied to a handful of creative writing MFA programs. These programs are highly competitive. Most programs consist of 20-25 spots (or less) and receive anywhere from 500-1500 applications. Acceptance is almost entirely based on a creative manuscript.

I didn’t get in to any of the programs. I spent the month of April crying on my living room floor.

The only perk of the arduous application/rejection process was that I remained on the mailing lists for some of the colleges. This is how I found out about the Distinguished Writers Series at Hunter College. After drying a trail of tears every time an email came in, I realized that Hunter had some well-known writers coming to speak. The talks are free and open to the public; you just have to email the administrator to make a reservation. I couldn’t pass up an opportunity to see some of these writers, so I signed up for a few of the talks this fall.

The first up was Eve Ensler. I was familiar with Ensler from my college days because she wrote The Vagina Monologues. If you think this play is just about vaginas, you are mistaken. Rather, it uses the concept as a vehicle to talk about many aspects of the female experience such as sexuality, gender roles, rape and assault, birth, and puberty. I was a member of the Women’s Action Coalition in college, and they put on The Vagina Monologues every year. I never had the guts to act in it, but I always went to the performances. It’s a really fabulous play. The episodes are, in turn, informative, sad, and hilarious.

In addition to being a writer, Ensler has been a tireless activist working with women who have been abused. She started the V-Day movement which uses money raised from performances of The Vagina Monologues to fund causes to end violence against women. It is usually performed around Valentine’s Day each year. And since Valentine’s Day sucks, I think using that “holiday” to bring awareness to such an important cause is an awesome idea. More recently, she created the One Billion Rising campaign to promote justice and equality for women. I’m not too familiar with this new campaign, but all the college girls cheered loudly whenever Ensler mentioned it. Hooray for college feminists!

At the talk, Ensler talked about her recent work in the Congo, where she heard stories that were so shocking and horrifying that she thought even more deeply about violence towards the female body. She also spoke about how perpetrators of this violence use rape and other means of abuse to disassociate women from their bodies, using a divide and conquer methodology.

Most of Ensler’s work focuses on the female body – talking about it, what is done to it, associating oneself with it, protecting it, and what this all means to women. Her new memoir, In the Body of the World, chronicles her experience with cancer. Her illness, along with her work in the Congo, helped her to connect with her body and realize her previous disassociation from it (she was abused as a child). 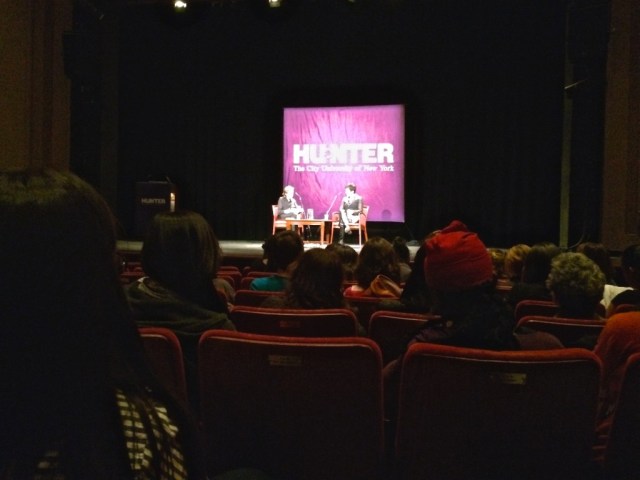 During the talk, Ensler read three excerpts from the memoir and answered questions from the audience. She was youthful, energetic, passionate, and a great speaker. She was also funny when the moments called for it, but very serious when talking about her beliefs and work. It was also a treat, for me, to be in a college environment and listen to words like ‘patriarchy,’ which I haven’t heard since college. I reserved the memoir from the library this week and I’m really looking forward to reading it.