I am way late on posting this, but that’s no indication of my opinion of the Hunter College Distinguished Writers Series. I went to three readings this fall (Augusten Burroughs and Eve Ensler were the others) and found each to be extremely interesting and informative. Most gave a first-hand look into the writer’s process, including what inspires  them, what they hope to achieve in their work, and what they’ve learned in the process. And, these talks were all free(!) and open to the public. I know many colleges have these types of programs and I would encourage everyone to take advantage of them.

Joyce Carol Oates is an enormously prolific author, with over 40 novels and numerous other plays, novellas, and collections of short stories. She’s been writing forever and has taught on the college level for over 30 years – in other words, she’s a pro. And it showed. She was very well-spoken and engaging. 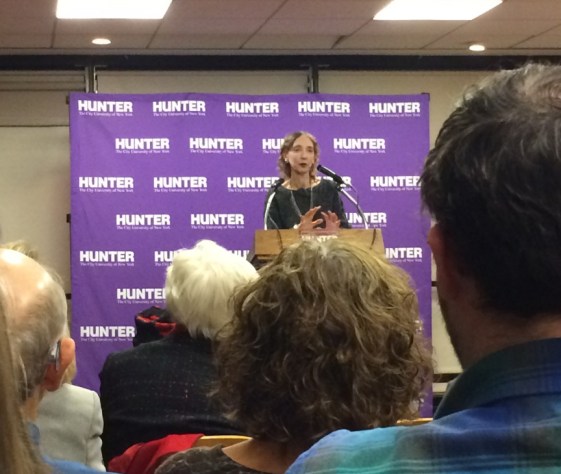 In contrast to Augusten Burroughs and Eve Ensler who read multiple short pieces punctuated with discussion, Oates read one long, complete story. The story she told was shocking and full of action, and I was hanging on to her every word. It’s been so long since I’ve been read to! Maybe a book on tape is in my future?

The story she read was The Girl with the Blackened Eye, which is available in full text here. In the story, a woman is looking back on an extremely traumatic experience that happened to her many years before: at the age of 15 she was forcibly abducted, kept in a cabin for 8 days and repeatedly raped, beaten, and tortured. She ended up surviving, even though her captor had killed other women before.

“I’m saying these things were done to me but in fact they were done to my body mostly. Like the cabin was in the Sonoma Mountains north of Healdsburg but it was just anywhere for those eight days, and I was anywhere, I was holding onto being alive the way you would hold on to a straw you could breathe through, lying at the bottom of deep water. And that water opaque, you can’t see through to the surface.”

The woman states that she never told her husband and anyone who “knows her now” does not know about this experience. The way that she deals with the trauma is interesting – she goes on to live a normal life and states that her life wouldn’t be any different than if the kidnapping and ensuing events did not happen. She tells the story quite matter-of-factly, which only adds to the horror of her experience.

“My life afterward is what’s unreal. The life then, those eight days, was very real. The two don’t seem to be connected, do they? I learned you don’t discover the evidence of any cause in its result. Philosophers debate over that but if you know, you know. There is no connection though people wish to think so.”

After reading the story, Oates told us that we all go through significant experiences (some maybe not quite this traumatic) but we get up the next day and must go on, impersonating a normal human. Although we view other people as relatively fixed, this is not usually the case – personalities are complex and life is continuous. It’s an interesting theory and makes for an unexpected ending to a terrible tale.

Oates also noted that she likes to write characters and voices that are very different from her. She mentioned that people like to sit with her and tell her their story, which implicates trust. This is evident in the story, as the protagonist is telling her tale:

“In my present life I never speak of these things. I have never told anyone. There would be no point to it. Why I’ve told you, I don’t know: you might write about me but you would respect my privacy.”

I’ve, regrettably, only read one work by Joyce Carol Oates – We Were the Mulvaneys –and I didn’t like it. It received a lot of press because it was featured in Oprah’s Book Club in 2001 but I know it’s not her greatest. Anyone have a recommendation on a solid JCO novel that you enjoyed?