I first learned about closures before starting my coding bootcamp and thought I had a general handle on the concept. Then I learned about them for a second time in my course and felt more confused than I was before. I decided to write a post to solidify my understanding of the subject (third time’s a charm, I guess?). The thing is – closures aren’t as complicated as they seem and they allow you to write some cool, creative, and efficient code. I think the key to understanding closures is to practice with examples and play around with the code until you have a good idea of what is going to return and why. This is good practice for understanding all coding concepts, but I think many explanations of closures have these lofty, conceptual descriptions that are confusing and make everything seem more complicated than it actually is.

To summarize, a closure has three scope chains. It has access to:

Here is a simple example of a closure: 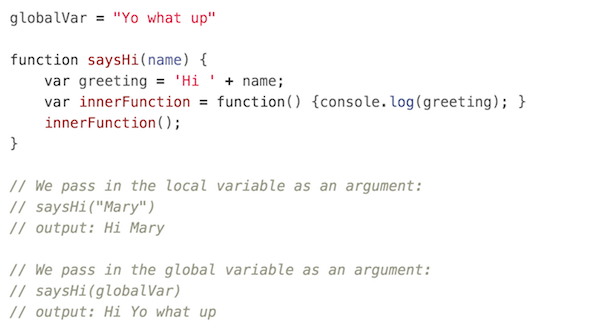 We can see the inner function’s scope:

And the outer function’s scope:

And the global scope!:

Now what happens when we add a variable to the inner function?

JavaScript doesn’t like that! We’re getting an error because the outer function (sayHi) does not know about the inner function’s scope.

How Does This Work? 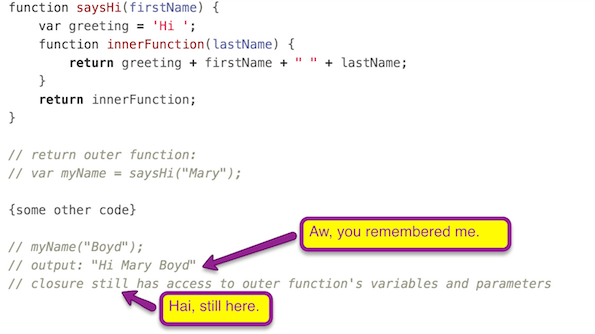 Fun fact: we can do all this because JavaScript has first class functions. From Wikipedia:

Why Are Closures Necessary?

1. A scope is mostly created at the function level (more on that below). They aren’t created by while/for loops or by if statements, like other languages. Closures provide us with more access and functionality.

2. JavaScript, in practice, is event-driven and asynchronous. Closures make event-driven code easier to write – we can make a single function which is executed in response to an event.

A Quick Note On Scopes

JavaScript used to only have two types of scope: function scope and global scope. With the new version of JavaScript, the let statement allows you to declare variables that are limited to the block, statement, or expression for which it’s used. In this example, there are no functions to be seen; the curly braces {…} define a new scope for the variable x. 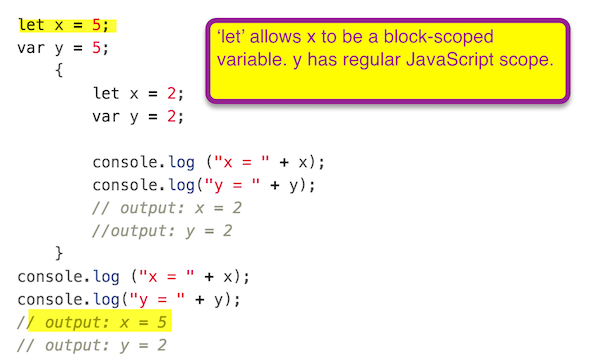