Home  »  Featured • Literary   »   Why Are We So Ignorant About Contemporary World Literature? 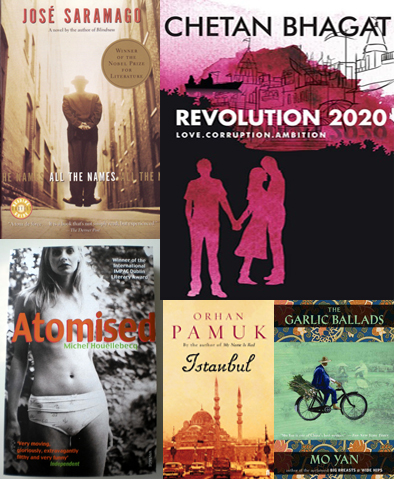 A recent article in BBC News Magazine asks: why don’t French books sell abroad? It got me thinking about the number of non-English speaking authors that I’ve read in the past few years. Now, name your favorite contemporary French author. Go!

Me too! From the BBC News article:

French authors routinely appear in the English-speaking world’s lists of the best novels ever – Voltaire, Flaubert, and Proust… sometimes Dumas and Hugo too. But when it comes to post-war literature, it’s a different story. Even voracious readers often struggle to name a single French author they have enjoyed.

France once had a great literary culture, and most French people would say it still does. But if so, how come their books don’t sell in the English-speaking world?

While French authors are an obvious example given the irony of the country’s rich literary history and the relative obscurity of many contemporary authors, I will go a step further and say – why don’t Americans know more about world literature in general? Mo Yan, Mario Vargas Llosa, Chetan Bhagat – who are these people? Answer: they are very accomplished and award-winning writers. But why don’t I know their names? How come I have not read their work?

In the U.S., American, British, and Canadian authors monopolize bookstores, libraries, and bestseller lists. It’s clear that publishers prefer them as well. From the BBC article:

“I am suffering, really suffering, because Anglo-Saxon agents are just ignoring the French book market,” Christophe Ono-dit-Biot tells me.

Ono-dit-Biot has just won one of the country’s top literary prizes – the Grand Prix du Roman de l’Académie Française ­­- for his novel Plonger (Diving). He now has five books to his name, but without a sniff from the UK or the US.

I consider myself fairly immersed in the literary scene – I’m a voracious reader, I was an English major, I write a book blog, I frequent every book store in the neighborhood, I’m a loyal patron of Brooklyn Public Library, and I have many family and friends who are fiction lovers as well. But my knowledge of non-English speaking authors is severely lacking.

With some exceptions, I would venture that most Americans are missing out on an entire sector of literature that is enriching and valuable. And it works two ways – not only do many Americans not read world literature, but many international audiences seem to doubt the quality and nature of the work of American authors. In 2008, Horace Engdahl, who was the permanent secretary of the Swedish Academy, told the Associated Press: “The U.S. is too isolated, too insular. They don’t translate enough and don’t really participate in the big dialogue of literature. That ignorance is restraining.”

I understand that this is not a new concept. It’s been 20 years since an American has received the Nobel Prize in Literature and critics have taken notice. The New Yorker recently explored this topic and provided some insight:

American publishers do translate too few books from other languages into English—just three per cent of books published each year are translations….More than sixty million Americans speak a primary language other than English—meaning that the United States is far from being backwardly monocultural or monolingual. Philip Roth’s New Jersey is also Junot Díaz’s New Jersey.

So, why should we care? I think there are many answers to that question but my personal reason is this: I love to see how other people live. Maybe it’s the writer in me, but one of my favorite questions when meeting someone, especially if they have an interesting/unusual lifestyle or profession, is – what is an average day? What do you do in your free time? Whenever I travel, I LOVE going off the beaten path and venturing into neighborhoods and towns. I want to see how the locals live – what do their houses look like? What are they eating? Do they live with a family or by themselves? What do they watch on TV? Do they watch TV?

Fiction helps to bring me into someone else’s world. Maybe it is an intersex Greek in Middlesex by Jeffrey Eugenides. Maybe it’s an old and dying Midwestern pastor in Marilynne Robinson’s Gilead. Maybe it’s an Indian immigrant family in Jhumpa Lahiri’s short stories. Where else do we get an honest, first-person experience into another culture or tradition? I’m not relying on Hollywood or TV to give me that. I’ve always found that books offer immeasurable insight into people and traditions that are very different from myself. It’s like travelling, but I get to experience it from my couch.

When I went to the Hobart Book Village, I picked up Fatelessness by Imre Kertész at a shop that specialized in international authors and prize winners. I had never heard of it but the subject looked intriguing and the man won a Nobel Prize, so, yeah… I’m really looking forward to diving into it.

What international authors do you enjoy? Any recommendations for a fabulous, obscure, non-English speaking author?